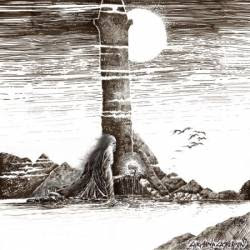 One of US metal's most undeservedly obscure and wholly under appreciated bands returns with their latest full length and it's mind-bogglingly good. For years Dawnbringer have lurked in the shadows, hiding in the crevices of extreme music's facade, continually serving up neo-classical hyperthrashing onslaughts for those diligent and patient enough to seek out the records. Now on Profound Lore i can only hope that Dawnbringer will receive more exposure and show so many sorry, sorry bands how metal should be played. This is some TRVE underground shit, played with a reverence for the classics and a professionalism and attention to detail that blows away most anyone else fucking around with this sort of recidivism.
"Nucleus" sees little change from the last record aside from an interest in writing longer songs. In that regard this feels more like a proper record as opposed to the "glorified EP" feeling that the shorter compositions foistered upon predecessor "In Sickness and in Dreams." The moment "Nucleus" starts blasting into the headphones you feel like you've been dropped in the midst of something fierce and utterly epic. You might as well be standing in a raging circle of horse-mounted knights doing battle, while dust and blood kicks into your eyes and the air rings with the sounds of death and battle. Obviously the classicism of Dawnbringer's approach lends to this cliched medieval feel, but when the riffs are this fucking fantastic you can't complain.
This is a guitarist's band and even more so this record is a six string wet dream. If you could seamlessly intertwine the symphonic riffing of Iron Maiden with the speed of early Megadeth you'd be getting close to the sort of chops on display throughout "Nucleus." Mastermind Chris Black brings some serious A-gaming to the table as far as shredding goes-tasteful shredding, even!-and defies every band on the planet to do better. This is a guy who's lived and breathed metal his entire life and it shows in the output. He even manages to once again integrate some modern black metal influence into Dawnbringer as evidenced by the minimalist blast beat punishments in "The Devil." His vocals have gotten cleaner without losing any of their intensity-overall i'm reminded of a slightly less hoarse version of Lemmy with a little Wino thrown in for good measure-and it works with the music perfectly, adding to the overall feel of metal romance and classical composition on display.
There's few bands mining this territory with any real success. I can think mainly of Hammers of Misfortune and Slough Feg, and i attribute their mastery of the form to the same reason as Chris Black's: these guys live metal. It's deep in the blood. It's like hearing an Iron Maiden riff and having to headbang to it no matter where you are. It's stopping the radio dial every time you hear the faintest snippet of Judas Priest. It's a fervent belief in the importance and vitality of this style of music and the fact that it's contributed so much to the lives of so many disaffected, jaded kids. "Nucleus" is a masterpiece of metal-as force, as music, as lifestyle. Don't fucking sleep on this.
Posted by Cory at 1:05 PM No comments: 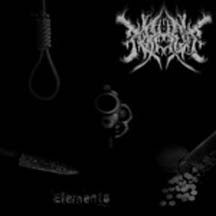 Sheer agonized and ghosting black metal drenched under the weight of its own wallowing sorrow, creating a crushing feeling of depressing oppression and truly living up to the name Hopeless. This is some serious end-times wrist slitting music-there's nothing but bleakness here and not a single glimmer of optimism. Even the feelings of regret shoved into this record reek of dismissal and failure, a picture of a life lived poorly, bereft of every good thing save memories of loss, disappointment and dead wishes. Yearning is transformed into lament and every desire becomes a taunting, choking piece of bile tossed back into the heart. This is someone's therapy and that feeling easily puts this record into a league with Lyrinx and Austere for me.
The sound is appropriately cavernous, with every instrument soaked in saturating, bloated reverb, creating a mountainous and distant sound. While this approach isn't new to suicidal BM, Hopeless certainly understands the atmosphere it's meant to create and exploits it to great effect. That distancing creates an extreme sense of dischord and hallucigenia in the listener, crafting an aura of unease throughout the album's runtime that's incredibly difficult to get past. This is a tense and volatile listening experience, not for faint ears or faint hearts. Like i said-wrist slitting music through and through.
Also at work is the standard Burzum-esque simplicity and repetition found at the heart of the best suicidal/depressive BM (which really isn't simple at all). Sound is layered and time is fucked with throughout, so guitars become hazes of washed out distortions and pianos become chiming bells tolling doom and end. Drums pound relentlessly and without variation, reinforcing the idea of waiting for death, the one wish that could possibly be granted by self-volition and willpower. The vocals are simply outstanding, hyper distorted and swirled in echo while being pushed way into the red and then buried. It's a superb and tortured performance that could only have been born of real and ample frustrations and while not the equal of Lyrinx or Make A Change...Kill Yourself, it certainly deserves a place in their company.
While the above comparisons are apt, perhaps the closest would be to Shining, as least in terms of aesthetic mission. While Hopeless aren't as near as complex or dissonant as Shining the emotions and intent seem almost exactly the same. Both projects are therapeutic for their creators, offering intensely personal takes on black metal that are meant more to exorcise personal sadnesses and angers than they are to appeal to the black metal audience at large. For that reason, in a lot of art, i find misunderstanding amongst many. For me it isn't worth a fuck if it isn't personal. There's a coterie of individuals who understand that and make art with that in mind, who have to do it because to not do it would be suicide. The power there is obvious-it's profoundly affecting and sometimes unnerving to digest-and it's waiting for those who would seek it out. Hopeless have made that sort of art with "Elements" and it awaits you in all its shrouding glory.
Posted by Cory at 6:58 PM No comments:

Whoa. It's been a long time since i've posted anything here. I know i've been remiss-the only explanation i can offer for my legions of devoted readers is that shit has changed dramatically over the last few months (for the better) and i just don't have the time to sit down and write like i used to. That isnlt to say that the house isn't crashing under the weight of piles of new music-it is, just as much as always, and i'm listening to it-it's just that the oodles of free empty time aren't there anymore. I'm going to try and post more frequently. I just received a ton of stuff from the Kunsthauch label, so i'm going to start off by reviewing some of their records. Thanks for waiting.