WHITE HILLS "STOLEN STARS LEFT FOR NO ONE" (Thrill Jockey) 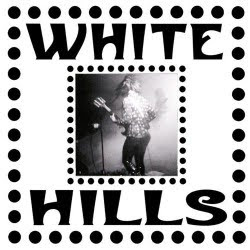 Thirty minute slab of vicious, paleolithic space rock from one of modern psychedelia's most inconsistent practitioners. I've steered away from White Hills and kept them distanced from myself for precisely that reason-some of the records they've released onto the world are complete and utter shit-but to my surprise they've put together some of their best material and slapped it together on this very lovely piece of wax (one thing White Hills can never be accused of is skimping on packaging and design; their vinyl is always jaw-droppingly cool and i appreciate that) and induced a head-nodding zone-out trip that rivals AMT at their wooliest.
I can safely recommend this on the awesome strength of the first track alone. "Drift Away" is a stone fucking killer, a maelstrom of guitar rock excess and moog waste rolled up into a thick fat thundercloud of negative bliss and bad vibes. And it rocks hard. Things start off slow and whispered until about four minutes in, when the distortion starts oozing out by the barrel and the drums kick in for some full frontal lobe massage and brain haze damage. Then the guitar solo starts up, cutting through fucking everything else on the track. It's glorious and it doesn't stop until the song does and i fucking love it. The best part is the guy isn't that great-he repeats a lot of the same phrases over and over certainly lacks a little in dexterity-but it doesn't matter because he's in his own little world, there's probably a fog machine vomiting smoke all over the room and White Hills are in the zone on this shit. Skill gives completely over to mood and feeling and desire and that sort of formless forgetting of reality is what the best psychedelic music is about. It's astral, difficult to tap into and it's very real. The fact that i'm disappointed by so much of what White Hills churns out just reinforces the quality of "Drift Away" for me-if they could get to this place, all the time, somehow, then White Hills would be damn near unstoppable.
But they can't get there all the time. This is the sad truth. They try, yes, but in this instance the effort alone doesn't warrant praise. Too many modern psych-rock outfits deviate from the rock aspect and deluge the underground with a reckless belch of worthless, meandering clatter jams recorded in their garage. Too many labels are eager to put that shit out if there's a semi-recognizable name affixed to the effrontery. Take a tour of White Hills' back catalogue and see what i mean. I don't want to listen to some idiot whale on aluminum buckets for 15 minutes in an empty garage. That's not pyschedelic, that's just fucking lame. Plug in, fog up and reach the stars.
Side Two of "Stolen Stars..." is slightly less successful in that it doesn't go for the throat in such an aggressive rock manner but it's still pretty mind melding. Two thick lengthy drone excursions made up of moog waves and feedback try to bring you back down to earth after the cosmic journey that "Drift Away" led you on. It's passable as well as physical (as long as the volume is high enough) but it isn't the same as Side One. I know that i personally favor a slightly more assaultive approach to psychedelia, and maybe my condemnation of White Hills for not fitting into that narrow niche is unfair, but i know they could be there, and that's what bugs me most. The band has talents they're not utilizing to the fullest, and i just won't be satisfied with them until they release the dragon wholly.
Posted by Cory at 6:20 AM

I was just digitizing this EP, and looking for cover art. Great blog!! Like your thoughts on the stuff I know about - look forward to reading up on the rest...