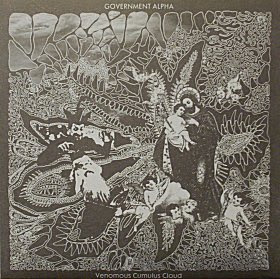 Pure psychedelic assault bordering on total holocaust. Government Alpha's brand of noise is broiling, hot and defiantly harsh but there's a transcendent, mirage-like element to his work as well, something that looks to take you to some other realm and melt your eyes right out of your skull. This album is a gorgeous atrocity, a hyperfierce meltdown intent on beating the shit out of you and then wiping you away into some noxious cloud of fuming, rancid heatstink. Think Merzbow leaning more towards the AMT side of the spectrum and you're beginning to get the idea. The screaming voids of Skullflower are another good reference point, but whereas Matthew Bower's landscapes are frigid and crystalline windstorms, Government Alpha's environments are more desert sweat and duststorms, an amalgamation of violent weather patterns scooped into a tornado of sonic horror.
The bruises begin the moment the disc opens up. It sounds like a swarm of bees run through an octave pedal and amplified about a thousand times before being run waaaaay into the red. This whole album feels like it's going to break into pieces under the weight of its own violence-every sound is created to bludgeon and render into piles of nullification, to reduce and make into nothing what once had form. This music goes nowhere and everywhere at once, content to inhabit its space in absolute dominion, oozing and looming, trying to fill every possible hole, crack, or crevice. Like the majority of power electronics, you could read some sexual violence in Government Alpha's work if you really wanted to, but the overwhelming attitude seems to be one of simply that-just a massive overwhelming. "Venomous Cumulus Cloud" is designed to destroy, and this regard it comes close to Hell Militia's credo of "Cut your flesh to widen your sight." Through destruction comes understanding, through pain comes hallucination followed by revelation. It wouldn't be totally off base to suggest that Government Alpha is looking to reach some sort of "spiritual" experience through these cataclysms-the idea of being immersed in something so formless and so much larger than yourself is certainly presented here. What you choose to take away from that, however, is completely left to you. It could be horror, pain, transcendence, joy or utter nothingness-all are equally valid and equally possible. Usually noise music isn't this open-ended; it's to Government Alpha's credit that this record is so expansive without making philosophical or dogmatic demands on its listeners.
Posted by Cory at 10:57 AM