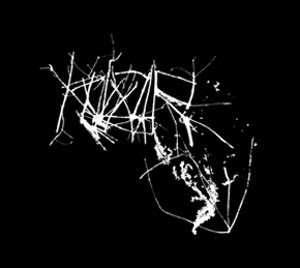 Brittle and immediate black metal iconoclasm from Denmark courtesy Ars Magna Recordings, again delivering on their aesthetic of emotionally fractured artistry filtered through traditional frameworks. Klor's self-titled debut is unique in the respect that it advances both an extreme, chilling distance as well as strains of extremely accessible extremity by way of shorter song structure and a reliance on simplistic (if obscured) melody. I'm reminded deeply of French post-industrial blackened terrorists Haemoth in Klor's approach; the same sort of reliance on machine generated texture imbues both projects with a manipulative removal that comments on black metal's outsider mentality as well as the more modern leanings towards depressive readings of existence and being. But whereas Haemoth proposed an indelicate violence directed towards the fabrication of modernity, Klor becomes reflective; the rage turns inward, channeling aggression in an insular direction with an end goal of self-eradication. Simply put, Klor hammer the sorrow into you.
Klor embrace a certain psychedlia in their approach to black metal; their tendency towards symbols alongside song titles like " Helmet Overgrown With Weeds" and the beautiful "Senseless Fire Ritual" both embrace and reject black metal's propensity for extension and hypnotism, employing battle imagery and pseudo-Satanic rites to evoke the idea of expanse and openness. While none of the songs on Klor's debut are overly long, they attain the feeling of length by way of repetition and hammering intensity; the relentless drum programming yields near-kosmiche patterns of inner escape and psychic recidivism. The stretches and yawns of time become gulfs of monochromatic technicolor vista, a flood of emotions painted all in one shade of despondency. The eight songs here become as one, a suite of existential torment that owes as much to Vomir as it does to Craft.
Anger is secondary to regret, though. Nostalghia and yearning become an ache that can only be adequately represented through violent confrontation with one's self; Klor inhabit the state of inner severance necessary to fully reflect on one's being and make the decision to sever connections with corporeal. This is not an endorsement but the suggestion of possibility; the vistas are open and receptive, the eternities blessed with majesty and willing to receive. Such is the way of torment. Violence becomes a shadow of intent, and failure becomes the mark by which all effort must be measured. The fragmented colors marking the inner design of Klor's debut aren't just dissassociative psychedelic tricks; they're a representation of the vomit colored insides of modern malaise, true banality and angst tossed off as graphic design. The outer design rings true: there is no variation, only sedation and the vastness of the always. The narcoleptic, dreamlike state that existence demands becomes a weight that bogs down value and self-worth. Klor works in shades of grey; the mesmerization results from the extreme tonalities apparent in the regurgitation of blandness.
Klor's debut acts as a sort of go-between for old traditions and modern black metal. At once both basking in primal aggression and reveling in post-modern texture, the depth of the record reveals itself upon multiple listenings. This isn't simple, nor is it easily digestible; it's trussed up in recognizable form purely for the purposes of distortion and obfuscation. The music is infectious, the vocals harrowing and carved out. This is music to tear yourself apart to, the shearing away of psychic excess in the hopes of arriving at deeper realizations regarding one's ultimate place in the world. Ars Magna Recordings again establishes itself as one of the leading labels interested in psychological black metal. Klor is a knife meant to help you shed the pretense you've been building your whole life. Make the first cut, and flay away the unnecessary. The weightlessness becomes flight, soaring apart from the earthly realm.
Posted by Cory at 9:10 PM