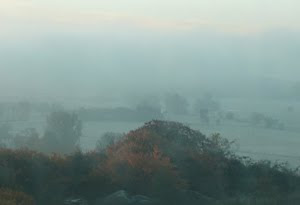 The eternity of the bleak rendered into limbo hymnals courtesy Kevin Drumm, taking his recent exploration of minimalism to a new extreme with this two cassette set. Comprised of 4 lengthy pieces adding up to one whole, "Dying Air" utilizes absolutely no electronics in its evocation of the ethereal, sounding something like a rotted out haunted house about to collapse upon itself in a heap of dust and decay. This is an open, volatile recording, full of menace and imbued with a sense of lurking terror. Here Drumm is truly working with sound-i'm hard-pressed to pick out anything even resembling an instrument-and his success in creating such a darkened, nocturnal ambience with a few echoes and clangs is mesmerizing. The idea of "field recordings" takes on an entire new context as Drumm takes and shapes severely disparate elements into a work that is at once pictorial and wholly indescribable. The stench of emptiness, the loneliness of engulfing abandonment. Both surface here, scarring and shredding as they worm their way into your dreams.
"Dying Air" is a mirage, willing itself into being on the strength of pure expectation. Existing as a washed out haze, the four parts conjoin into a veritable cloud of unknowing sans any metaphysical context. It's barely real, but its presence is magnificent and foreboding, threatening the listener with the implication of violence and the blackened terror of the unseen. The spaces between the sounds become as hollowed out and cut away as the sounds themselves, audial memories returned to the corporeal realm to extend their spectral hands amongst the living. Their touch is chill and enervating, the cumulative effect of Drumm's composition being an intense and fractured anxiety that crawls across the skin like a pallor, blubbery and congealed. This is truly dead air, wasted and lost, stumbling through the nether until its final, choking dissipation. There are no mourners, and there are no real memories. All that remains is a whisper, a flicker in the eternal night, a wish against the actual. This is the revenant of harm inflicted, of atrocity perceived. You have been made a participant, a spectator, willingly or unwillingly.
Drumm has carved out a face of anguish with this set; the darkness inherent in all of his work reaches a near suffocating level here. The back-end processing of his music usually allows for a certain distance; even wrapped up in the death-throes of "Sheer Hellish Miasma" there's an idea of respite, because it's known this was a manufactured aura. It must end. With "Dying Air," Drumm grants no such assurance. These are the banal, haunted sounds of existence, the creaks and groans of life deteriorating all around us. These minute screams are here, buried, scraping their way to the surface. The end is bubbling up like rancid fish, flesh flayed and hanging off the carcass as so much dripping, gummy viscera. The gate is open; the way is known. These are the echoes of finality.
Posted by Cory at 3:41 PM