THE MELVINS "THE BULLS AND THE BEES" (Scion A/V) 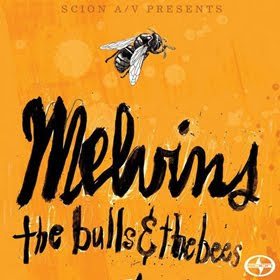 Stopgap release from the still-augmented Melvins, stepping back from the raw brilliance of "Sugar Daddy Live" and into the over-saturated studio megolomania that has defined the last few records of this particular lineup. The Big Business presence is still too strongly felt for my tastes; to a certain degree I feel their sensibilities curb Buzzo's aggressiveness and the resultant mix is something less than what either could achieve on their own. The vocals are far too immense here, burying the songs under an avalanche of triple tracked, echoed out harmonies and counterpoint. It's a chorus of monstrosity, a madrigal of malignancy, overwrought and ultimately too concerned with tunefulness. Buzzo has always warped and fucked with his vocals-it's been a key part of the Melvins sound-but it was never as insistent as it has been with the addition of Big Business. It's too poppy, and it's too much. What worked so well for Karp trips the Melvins up, continuing the band's identity crisis.
As for the music, it's pretty much what you'd expect. As Buzzo's gotten older he's become more technically flashy with his riffing; Crover's endless improvement as a drummer has allowed the Melvins to churn out song structures that twist and assault and make little sense when viewed through a prism of traditional timing. As always the double drumming is incredibly impressive; the sheer strength of the percussion on "The Bulls and The Bees" more than warrants a spin. The problem is it can't save what's essentially a fairly boring stretch of songs. There are moments of brilliance: "The War on Wisdom" devolves into some serious off-time metallized intensity at its end, and "We Are Doomed" hearkens back to the truly immersive and brutal sludge belligerence of the type found on "The Maggot"'s mighty "Amazon II," complete with an abundance of scathing guitar shrapnel and scorching feedback laid down over a crushing, hypnotic riff. But the rest of the album is dullsville. "Friends Before Larry" and "A Really Long Wait" are standard Melvins time fillers masquerading as experimentation; the opium den vibe achieved by "A Really Long Wait" is only marginally interesting, and certainly not done well enough to carry four minutes. Closer "National Hamster" cuts close to the rock and roll trope quick, with some heavily melodic riffwork that recalls Buzzo's shadow heroes Ted Nugent and KISS, but much like the worst of their work, the track is arena posturing by the numbers with only a fucked up over-effected vocal to redeem it. And it doesn't.
This EP is free courtesy the Melvins and Scion A/V, and I certainly applaud the generosity of both parties. It isn't a terrible record; it simply isn't a great one. I truly think the Melvins have been in their current incarnation for far too long. There was something magical about the core group of Buzzo and Dale, and each of their longer term bassists (Lorax, Mark D, and Kevin Rutmanis) grew the band's sound without the radical reinvention the current lineup has wrought. I'm very much looking forward to the new Melvins Lite record, essentially the classic pairing of Buzz and Dale with the addition of Trevor Dunn. The Melvins are still an exemplary band capable of colossal heaviness; perhaps the future will deliver on the promises of the past.
Posted by Cory at 12:18 PM