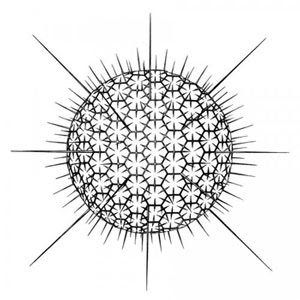 First things first: AFCGT is a group made up of the A-Frames and the Climax Golden Twins. I hate the A-Frames; i LOVE the Climax Golden Twins. In this setting i view one as the catalyst/springboard for the other-i know that is ridiculously unfair and horribly biased, but there it is. On we go.
"AFCGT" is the "debut" record for this group after a deluge of self-released CDR's and live albums. It's a fucking rock destroyer, drenched in tribal primitivism and stoner-rock distortion belching. Coming off immediately like a sort of Mudhoney-on-speed amalgamation of thick acid-laced fuzz and krautrock-influenced hypnotic bludgeoning the ensemble takes no prisoners and never lets up or relents across its minor sprawl. For me the novelty is in hearing CGT rock this fucking hard-while never a "conventional" group in any sort of sense they have NEVER displayed the level of ferocity that they do in these collaborative efforts. Mayhaps that's the influence of the A-Frames-if so then it's the one redeeming quality they'll ever display for me. If not then it's something else, a hithereto untapped source of rock regression, a Stooges-esque swagger and bombast that's just cool and fun to bear witness to. I like to hear bands outside of their element so long as its not contrived and this is totally forward facing, just another facet to a group that has been nothing if not impossible to categorize. Hearing CGT embrace rock destruction like this is weird-it's not what you expect and the fact that they do it this well is awesome. The album runs in other directions too-mostly hanging in a sort of alchemical space where repetition yields transformation and enlightenment; many passages in this album become totally numbing in their assault, drenching your headspace with effect upon effect upon loopy mindfucking effect. Winds and air roar and swirl and wage war with the air you're breathing-you' d better inhale fire and learn to process it if you mean to survive the attack. Who's doing what is unimportant-with CGT it never has been as the sounds have been so varied and with the A-Frames i can only assume that they're doing what they do (it's their drummer and bassist here so i guess i need to be sorta fair-both of those guys are probably rocking just as hard as the CGT). These two bands complement one another-they propel each other to reach greater, unattainable heights and in the process create something way larger and more affecting than either group has manifested on their own. CGT have impressed me time and again with their narcoleptic, dreamy outings but they've never been as aggressive or confrontational as they are in this formation and that transformation to me is exciting. You can't go wrong in grabbing anything you see from these guys-this one will just be easier to find. Masterful.
Posted by Cory at 6:21 PM