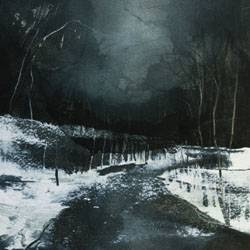 I don't like Agalloch. I have never understood the overwhelming critical and public popularity of this band. Every effort i've ever heard from them has been the same: incredibly overbearing, self-important goth rock pomp dressed up in thin trappings of black metal. They're black metal the same way that Christian Death are heavy. "Marrow of the Spirit" has arrived with little fanfare but with a ridiculously enthusiastic and immediate reception. Already vaulting to the top of many "best of the year" lists from both major publications (New York Times) and genre-specific rags (Decibel, et al), Agalloch are poised to sweep another number of more deserving releases under the proverbial rug, a triumphant gleam in their collective tear-weeping goth rock eye and worthless trophies in hand.
I wanted to make sure that i hadn't missed something since i'd last listened to Agalloch so i gave this record a thorough run-through last night and my opinion was largely unchanged. Agalloch still sucks, and their music is still a bloated corpuscule of pretentious black-metal aping drivel. I experienced a small tremor of excitement when i found out that Agalloch had enlisted Aesop Dekker (of Ludicra) to handle drum duties on "Marrow" but as fine a drummer as he is, and as well versed in more traditional black metal as he is, it isn't enough to overcome the hulking wreath of overwrought compositional masturbation on display throughout the album. Composed of six tracks clocking in at a substantial 65 minutes, "Marrow of the Spirit" absolutely crumbles under its egotistical vision and ambition. The goal here seems to be (as it always has) epic black metal in the vein of Weakling or Nargaroth and while lengthy songs will get you part of the way there the other necessity is quality, and Agalloch just doesn't have it. Every track is full of bland watered-down post rock bullshit, the sort of guitar triple tracking that even Mogwai would have tossed out for being too fucking lofty. Tones change in the midst of songs, creating a tremendous removal from any sort of transcendence that might have been obtained by the immersive length of the material. It's all just so much black metal lite and it's sad that this is what passes as exemplary extreme metal art. Agalloch take much from a "depressive" band like Katatonia (also pretty overrated, in my eyes) and seek to rough it up by throwing in some blast beats and a few rasps but it's a polymer that fails every time. It's posturing, metal created by artistic music goon minds because prog rock doesn't do so well these days.
Of course there's nothing close to bands like Dream Theater here; a more apt comparison to modern prog would be Porcupine Tree, another band trafficking in a light reimagining of what came before. Both bands write mostly terrible songs and both bands cloak those terrible songs in a package of artistic and intellectual importance, aptly fooling the public (in the case of Porcupine Tree) and the critical community (Agalloch, for so many years now.) There's no redemptive qualities here. "Marrow of the Spirit" is boring, regurgitated and reconstituted crap. There are worse bands, yes, but few that mine a genre so efficiently and cutthroat as Agalloch. By the time i got to the last song, i found myself shaking my head in disbelief and dismay at the horrible pretension of what i was hearing. Acoustic guitars, verses delivered in windy whispers, blobs of guitar distortion hanging in the back, violins wailing mournfully as the album sputters out. Agalloch strive for the sort of beauty found in the most elusive and romantic black metal, the kind propagated by bands like S.V.E.S.T. and again, Weakling, but they will never craft anything as remotely haunting or gorgeous as the first three minutes of "Dead as Dreams." They just don't have the passion or emotion found in that sort of black metal. Instead Agalloch are content to writhe around in the goth-rock sandbox, browbeating black metal to serve their needs while their records browbeat an undereducated audience content with being served falsehoods.
Posted by Cory at 7:40 AM

So Porcupine Tree is "fooling the public"; hmmmm, it's amazing that you can see what an ever increasing number of listeners have somehow overlooked - the PT Deception. Having listened to PT since the late 90s, I'd have to say you are only fooling yourself. You've created a nonexistent cloak of deception in your own mind.

I knew this one would push some buttons. I'm glad you actually took issue with the stuff about Porcupine Tree and you aren't getting all over me about Agalloch. I like Steven Wilson quite a bit and much of his work as Bass Communion blows me away. It's really beautiful stuff. I just don't care for Porcupine Tree. It feels too safe for my tastes. My comments derive from the fact that much like Radiohead, PT are a band that garners a lot of critical acclaim for being musically removed from their contemporaries despite not offering anything that i can really see as challenging. Same with Agalloch. There's just not enough there for me.