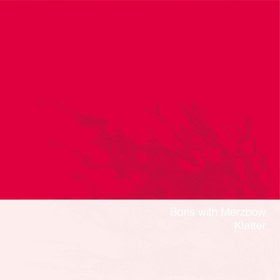 The Boris deluge of 2011 begins with this uneartherd collaboration recording with Merzbow. Originally recorded a few years back and slated for release on the now presumably dead Troubleman Unlimited label, "Klatter" finds all the players inhabiting a much more psychedelic, open sort of spaciousness where noise becomes gentle and damn near calming, reducing the rock elements to a mere landscape upon which all the principals wander aimlessly. It's damn near pastoral, pushing away the more abrasive elements that both acts so easily summon up in their own worlds. It's fairly amazing to me that most of the Boris/Merzbow collaborations veer in this more relaxed direction; aside from the quintessential double live recording "Rock Dream" from a couple years ago (which i consider to be the absolute best Boris album) everything they do together seems to distill itself into a reflective definition of sonic terrorism. Oftentimes these are rock songs, with "Klatter" being no exception, but they're so removed from any sort of sense of danger or immediacy that they become something else entirely, a sort of noise mood music, i guess, or maybe something closer to Windham Hill for HNW fans.
Similar in presentation to 2005's "04092001" LP, "Klatter" is a tear-through of a couple Boris tracks and two "new" compositions crafted specifically for this release. The songs differ little from their actual versions other than having Merzbow shred away on some electronics and computers over the top of everything but it does create the idea of the songs themselves being ripped away from their actual structures and conceptions and in some instances i feel the version with Merzbow have been stronger than the actual "official" takes found on the albums proper. "Naki Kyoku," for instance, becomes positively oceanic in scope and mass, stretching the song's original three minute length to almost 15 and rendering it totally washed out, a hypnotic nodding trip off into the void with Wata's echoey guitar leads meandering into a shimmery burbling nowhere. "Akuma No Uta" rocks as hard as it ever did and gives way into the belching goop of "Jane," a 13 minute ride down a ribbon of caramel drone, all thick, sweet and unforgivably viscous.
This is Boris doing what they do best: constant reinvention and manipulation. What they get out of Merzbow is more texture, an ability to showcase a different facet of their sound that's always been there but often recedes due to the demands and constraints of rock-oriented songwriting (this assessment is applicable only when Boris are choosing to work in that form, obviously). While not all of these collaborations have been total successes, they're always interesting and worthwhile for any ears so inclined. Merzbow diehards will probably be disappointed by the submissive role he seems to take on "Klatter" but if you need something harsher you could always track down his onslaught with the Men of Porn (which is really fucking great). For me it's another excuse to revisit one of my very favorite bands.