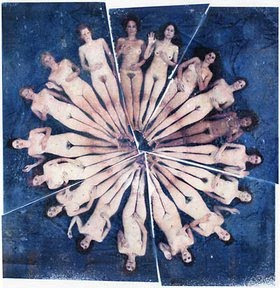 Out of print before it got on the shelves, which is really truly sad, because this is easily Alvarius B's finest work and deserving of being heard by a larger audience. Everything confrontational about Alan Bishop's previous work under the Alvarius B moniker is thrown away, leaving a record of intense, straining, introspective beauty and suffocating melancholy. Across all of the SCG material i own (tons) as well as all of Bishop's solo work i've never heard something this tender and confessional pouring out. While many people want to say that SCG's last album proper, "Funeral Mariachi," was the one most haunted by Charles Gocher's passing i'd say it's this one instead, laying out a feeling of working through tragedy that not even Rick and Alan's "Brothers Unconnected" tour could rival. The emotion seeps out of this album like blood pumping through a grated heart, raw and wounded and horribly, inescapably real.
The difference is apparent immediately. Opener "The Dinner Party" is a lovely slice of French style pop by way of the world psychedelia the Bishops are so famous for, resulting in a soft, dreamy soothe of a song, with Alan's vocals stroking you like a kitten until you're all purrs and contentment. "Humor Police" comes closest to the Alvarius B of old, with Alan's sneering vocal coming from a weird place of fervent, fevered anxiety. "Well Known Stranger" and "3 Dead Girls" are two of the most gorgeous songs i've heard coming from Bishop, straight shots of moon-stained disaffect and contemplation, with "3 Dead Girls" coming very close to approximating the sort of "radio-friendly in Dubai" pop sound that SCG achieved at their very best. The rest of the record is given over to bridging instrumental/wordless vocal pieces, almost all of which are airy and floating, little drifts of warm, inviting sounds meant for comfort and grounding. Again, the welcoming feeling here is almost entirely foreign to an Alvarius B release, and while it's certainly different, it's not at all disconcerting nor alien-instead it sounds like this is what Alan's been building up to for a long, long time. "Face to Face with a Couple of Axes" and "Like that Madri Gal" are both complex, well-crafted compositions of considerable melodic heft, simple-seeming but possessed of a presence that pulls you deeply in to the sounds spilling out towards your ears.
There are two covers here-the James Bond theme "You Only Live Twice," transformed into something totally lacking in menace or swagger but charged with regret and longing, and the Beach Boys' "God Only Knows" done near exact, just less dense and more direct. The lyrics take on an especial poignancy when viewed as a response to Gocher's passing, as though Bishop were too shaken to confront it head-on, choosing to use Brian Wilson's words and melodic straining to express the sorrow he felt. The end is a swarm of tape delay and lyric hacking, closing the album on a note of sour humor so intrinsic to Alvarius B, but the overall feeling is one of remembrance and nostalgia, a requiem for a friend and a self-reminder not to dwell on life's inexplicable (and unavoidable) sadnesses.
This is as naked a statement as we're likely to get from Alan Bishop. He's given so much here that it almost seems a complete reinvention of his alter ego-from jaded, hyper-intellectual prankster to sensitive and thoughtful troubadour reacting to tragedy. Eyvind Kang's myriad contributions to "Baroque Primativa" add to its sentimental power and compositional complexity, allowing Alan the tools needed to craft such an astonishing sonic palette. To call this record "major" is tremendous understatement-it's easily one of the best of 2011, obviously Alan's finest solo work, and a true piece of haunted melancholy and personal exorcism. Really, really great. You need to hear this. Highest possible recommendation.
Posted by Cory at 8:50 AM

This sounds amazing. I wish I woulda known about it before it sold out.

Me too. There were only 300 copies. CD version will be out on Abduction in March, just a bummer the LP's gone because the artwork is very very cool.