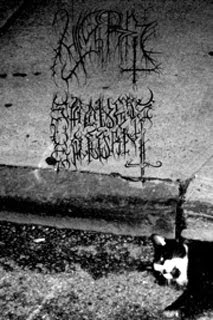 Harrowing split of lo-fi blackened extremity from Utarm and Sadness Saturn, an excursion into obscurity that blankets all in shades of grey and void. Another example of a severely well-conceived split record, the two acts here both complement one another and seem worlds apart, creating a mesh that gives itself over to disorienting confusion and wasted mesmerization. The common meeting ground is theoretical black metal; from that palette each band crafts its own potent mixture of terror and bleakness.
Utarm occupies the first side with their punishing dirge "The Cumridden Plague." Massively blown out crumbling guitars scorch out rote black metalisms in the form of weeping minor key chord voicings while seriously abrasive vocals wash over the entire mess, creating a stifling aura of hopelessness and rage that overtakes the entire piece. Whatever melodocism was present via the guitars is rendered inconsequential, a mere addendum to the onslaught of screaming indictment that constitutes Utarm's approach here. This is unbridled iconoclasm, a rewriting of the black metal template to suit the aesthetic needs of something far more corrupt and frightening. Utarm here are tapping into absolute negative space, and the result is a winterwash of blinding, suffocating fury and angst. This is pretty much the audio accompaniment to someone falling completely apart, and it's appropriately unhinged and unsettling. The psyche shatters; the self cripples. This is the sound of the bottom.
Sadness Saturn's side consists of three spacious tracks of hyper-distanced hypnotic black metal, sounding like it's coming from another world buried five miles underwater. For those familiar with Servile Sect (a sister band to Sadness Saturn) you'll recognize the vaguely psychedelic textures and machine-like intensity on display throughout the material. Though divided, the three pieces really act as one whole, opening up with grueling mechanized BM terror that gives way to washed out open-space drift, culminating in dirging, narcoleptic reaching metal deconstruction. The truly blasting black metal parts speak to the earliest one-man explorations of the genre, with an unchanging pace and temperament that belies its creator's isolation and disgust. While that perhaps simplifies things too much (Sadness Saturn aren't a traditional black metal act, in terms of sound or philosophy; the structures hint at the progressive and the atmospheres are decidedly oblique) it does give an idea of the sonics. There is a feeling of aristocracy here, a purity of black metal ideology that understands the necessity of removal for the music to be most effective. Sadness Saturn seems to come from universes far away, the message transformed into something recognizable but still buried with haze and mystery.
This is a split that appeals to the most dedicated underground denizens. The refusal of obvious black metal structure combined with the reinterpretation of classicism by both units makes for thirty minutes of highly unique, harrowing exorcism. Utarm especially come on strong here, but Sadness Saturn's contribution speaks to a knowledge of BM's history as well as an almost innate sense of where it can go without sacrificing its core aesthetics. Beautifully conceived, and worth tracking down. The Handmade Birds version comes in a gorgeous pressed slipcase with a rusty razor affixed to the front, an additional acknowledgment of genre intent that only heightens the split's caustic environment. Highly recommended.
Posted by Cory at 6:48 PM