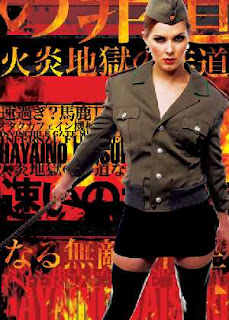 I'll say it right away so there's no confusion: YOU NEED THIS. If you consider yourself a person who has any sort of interest in extreme music, then this record belongs in your collection. I don't care if you don't like metal because that isn't the point. The idea is intensity and there is no band currently operating (with the exception of perhaps Cobalt) that delivers this much of it. This is the absolute flatline. This album will crush you and leave bloody smears across the road where you used to stand. This album completely fucking destroys, and it receives my highest recommendation.
It's no secret that Hayaino Daisuki's last album, "Headbangers Karaoke Club Dangerous Fire," was one of my favorite releases from last year. I listen to it regularly. When Hydrahead announced new material forthcoming many months ago i found myself in an intense state of anxiety, waiting with baited breath, checking dates and statuses and dissolving into a state of unbridled, frightening need. Now it's here. Four songs in twelve minutes. Some might say that such a meager amount of music isn't enough to constitute an "album" proper but a better question is how much more of this anyone could really stand. It's just too fucking punishing, too sweat-soaked and adrenaline fueled to be consumed in anything other than these sparing doses. It's more than enough-i have a hard time imagining taking in a "true" full length from these guys, because so much would escape you. This is the purest distillation of metal. It's triumphant like no other band. It is the zenith of what metal can achieve.
So who are these guys? I'm going on and on like you're well-acquainted (and some of you may very well be.) This is one of Jon Chang's post-Discordance Axis projects, the other being hypergrind assault vehicle Gridlink. Gridlink bears more in common with DA; Hayaino Daisuki is Chang's tribute to all the metal he loved as a teenager, obscure groups both Japanese and American and Slayer in particular. The music is beyond anything i've heard in the metal arena; it's blindingly fast without resorting to blastbeats and gorgeously melodic without losing any of its blunt force impact. It's like a bruise made of pretty colors, a rainbow of pain, the feeling of pushing yourself past where you know your body can go. I've used the description "Dragonforce on crack" because it's the best approximation as far as speed and melodicism are concerned; forget everything else because Dragonforce are really stupid. Hayanio Daisuki are as much a physical presence as a musical one; i would kill to see these guys live because i can't properly visualize what it takes to play music this levelling. Chang screams his lungs to shreds and again cements himself as probably the best metal vocalist currently out there-all high end, throat-shredding screams, taking Tom Araya's vision to its logical extreme. It seems like Chang is on some mountain screaming down, afraid that if he doesn't start coughing up blood from his attempts we might never hear him. It's fucking amazing. Gone are the guttural earthquakes that populated DA's albums-there is no vestige of death metal left. Hayaino Daisuki are so in the red all the time they make Boris sound like Taku Sugimoto. The guitar and drum work is blinding-fast, fast, fast and beyond tight. It's stop on a dime level shit, but there is no start/stop here-it shreds all the way through, every song. The Slayer influence becomes even more pronounced on this set though, with the band lurching into some proper Slayer-esque halftime breakdowns replete with shitloads of ride cymbal and china crashing. It's a further progression from the unrelenting aspect of the first record and shows Hayaino Daisuki further mastering the craft of metal.
There's no irony here, not even a trace of it. This is unabashed love for speed and headbanging thrashing. "Reign In Blood" was as important to them as it was to me, and for all the same reasons. Whether you can identify with the lyrics to "Angel of Death" is beside the point-that isn't what matters with this sort of music. Chang has often said that all his Hayaino lyrics are just old Japanese ghost stories reconstituted; despite that specific sourcing he remains oblique enough that the words can resonate and have a hundred different meanings to as many people. There's a tiredness but also a tenderness. This is a band unafraid of sentiment and that makes their stance even more uncompromising and their music even more polarizing. The delivery is what hits the hardest and if you can't appreciate that then this shit is lost on you. This is everything i think music should be.
Posted by Cory at 5:35 PM

Dude, "nadir" means the bottom. The lowest point. Was that what you were trying to say?

whoops. i always thought "nadir" was good. it's been corrected. thanks.

It's coming up on November and this is still album of the year for me... it didn't change my life, but it sure as hell makes it a million times more awesome.

I must have listened to it 8.3 million times already and it still makes me lose my fucking mind every single time haha