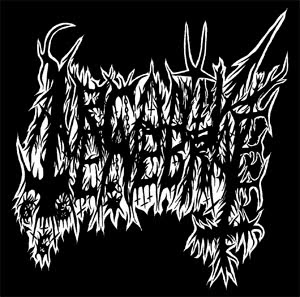 Crude and obscure bedroom black metal heavily indebted to the Black Legions, with the shadowy spirit of Belketre looming most ghastly. This is an extremely simplistic record, one where atmosphere and idealism factor in much more than instrumental ability or compositional skill. Almost every riff is horribly chromatic and drenched in fuzz. Guitars are way up front and the drums are poorly played at best, many times so off the beat that the song becomes a weird sort of drunken, loping loop, recycling on itself woozily until momentum brings everything rolling together again. This is an ancient style of black metal, what many would refer to as "kult" but not necessarily true.
Drakkar is one of the most interesting labels in that they have been around for a long, long time and have released some of the genre's most significant milestones. Vlad Tepes, Vermeth, Mutiilation and Torgeist all had defining releases on Drakkar and in the passing years the label has always remained true to that low-fi, alienating sound while going on to unleash albums by some of the more technically accomplished black metal bands (Grand Belial's Key, Watain, Impiety.) What has become unclear is whether the "Black Legions" sound is now nothing more than a joke or an extreme reverential nod by a band like Arcanus Tenebrae. As poorly played as the majority of this album is, i have the sneaking suspicion that the musician responsible is actually quite accomplished as an instrumentalist-you can hear slight echoes of it on tracks like "Pest" and the massive guitar layering of "Hateful Blackness In The Horizon" and the outro dirge. There's a deft hand at work there and it seems as though the rest of material is being played in an intentionally amateurish fashion, presumably to attain a more primitive and necro" sound. This speaks to the worst of black metal, a style of art that's nothing more than a genre exercise. As interesting and recidivist as this album is there's the feeling that it's just an intellectual demonstration, a tour through some fanatic's record collection, a tribute to the Black Legions that's as accomplished as the previously reviewed Drowning the Light effort, "The Blood of the Ancients."
If it isn't an elaborate and well orchestrated musical hoax, then this is an amazing trip through time. The idea that someone would still be making black metal like this without any genre touchstones is almost unfathomable. Either way, it's a confusing and engaging piece of work. If you like your black metal rough, jagged and fucking cold, then Arcanus Tenebrae is an entity worthy of your attention. If distance and dissonance are off-putting to your ears, then stay very far away. I personally commend the oblique and challenging nature of this recording but proceed with a wary caution-the time of the Legions has well since passed.
Posted by Cory at 5:47 PM

i just found your blog and i have not read this one because i don't even know who arcanus tenebrae is... but i have read some of the other reviews you wrote... and they are really great! both the Heather LM and the Zaimph reviews are very good... i look forward to reading more...

thank you. i'm glad that someone out there is finding this stuff. I worried if i was being too harsh on the Heather Leigh album but that one really is pretty self indulgent (not always a bad thing) and boring. I wish i had a better grasp of where she was coming from musically. She's done a great job of crafting her persona.