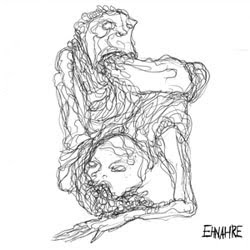 A devastating, hateful knotted up mess of a record, touching parts of doom metal, post-rock, hardcore and free jazz terror until a unified whole of distress and tension is created. This is one of the moodiest, most thorny records i've heard in some time, equally parts challenging and crushing and what it lacks in actual listenability it more than makes up for in breadth. Anguish is Ehnahre's bag, an intellectual and philosophical sort of stylized grasping that becomes distanced and bileous within minutes. If it wasn't so impersonal and poetic i'd call this this most damaged, emotionally wrecked album i've heard this year.
Fittingly enough, Ehnahre are an offshoot of the equally enigmatic and elliptical Kayo Dot, which easily accounts for the compositional ambiguity but not the rage. While Kayo Dot certainly have traffiked in heaviness (albeit of the spazzed out Naked City variety) they've never really been an angry band-every moment of release is crafted for symphonic effect, a stately build up to the architectures of sound the band trades so well in. Like Mogwai, you know where you're headed with Kayo Dot. Sometimes it's cathartic and sometimes it's infuriatingly disappointing but you know where you're going to end up. With Ehnahre you're just stumbling drunk in some rotting, stinking alleyway hoping you don't fall onto a knife and then into a puddle of piss filled with glass.
"Taming the Cannibals" is both stark and full, a dichotomy that works to the band's benefit even as it alienates the listener. You're challenged from the outset-this is Slint taken to a Gorguts level extreme, filtered through a prism of Don Caballero and Atheist on quaaludes. Whether to call Ehnahre metal or not is a good question indeed and likely one that will be debated for a while; the aggression and discordance (as well as the ample amounts of blast beats and double bass dexterity) certainly mark it as such but the pace and atmosphere speak more to Disembowelment and King Crimson than Keelhaul. So too do Ryan McGuire's vocals speak more to a Khanate-esque approach than any other genre, and the presence of James Plotkin in the mastering chair only underline the similarities between the two sonically. Both traffic in spacious, wasted dirging puncuated by harsh vocal admonishments and lyrical declarations of disgust. Both value weight both and both understand dynamic, but where Khanate move at one endless, dragging slosh, Ehnahre dance and dart and stumble, bouncing off walls while spitting in faces. It's fractured-i'm not sure if i can term it any better.
Those fractures add up to an infinite slicing. This music cuts through from the outset, the moment Ricardo Donoso's buzzingly busy drums begin to boggle and disturb the mind on "The Clatterbones" and throughout (and here even the lyrics take on a sly referential, with their latent and hinted anti-semitism recalling the more extreme side of black metal), carrying through to the industrial waste of "Revelation and Decline" and into the tortured doom agonies of "Birth." It's a stunning construct by musicians who are obviously paying attention to both the past and the contemporary, a microscope trained on the debris left by those who came before and did only slightly less. This is music for musicians, yes, but it's also music for anyone who's felt defeated and shit on, as well as anyone who's yearning for an angular and spiteful declaration against everyone else. This is a dance for the world's end, a ritualistic call for blood and acid rain, an elegy crafted out of both temperance and haunting despair. Truly unique, twisting and mathematical, recommended for anyone into both Rodan and Monarch. Great stuff.
Posted by Cory at 6:33 PM