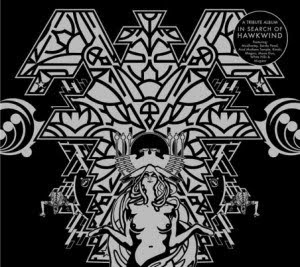 This album marks the second Hawkwind tribute album i've reviewed and the third one i own overall. I note this fact because i don't own a single album by the actual Hawkwind-it's just these tributes have had such stellar lineups it makes me forget the fact that Hawkwind never really clicked for me. Call sacrilege on me if you must but i never felt the need to go space-questing with the band that kicked out Lemmy.
"In Search of Hawkwind" originated aa a seven-inch project commissioned/brainstormed by the guys from lackluster psych band Mugstar (what an awful fucking name) and here they spiderweb those little slabs of wax into an all-out hour long freakfest showcasing some of the more song-oriented material from their beloved spacelords. Everything here fits nicely into ten minute boxes. Fittingly enough Mugstar themselves get two tracks, tearing through "Born to Go" and "Paradox" and doing a pretty decent job of both (although Paradox rocks harder and seems a bit more frenzied, both have ample amounts of whoosh and cosmic burbles); the quasi-fine work they do here almost leads one to believe they aren't one of the most workhorselike and boring psych-bands out there. On the opposite end of doing well, Kinski turn in a plodding and near-inept take on "Master of the Universe" that only serves to remind me why i hate them so much. Bland sound, whiny singing and utterly terrible guitar playing (seriously shitty-the guy thinks turning on a fuzz pedal makes you Hendrix-level) along with a turtle-like pace through the song all add up to six minutes of crap served piping hot. If i ever met anyone who told me their idea of psychedelia was Kinski, i might have to punch them in the face. Almost as bad are Magoo (and again, what the fuck? Magoo? Are you kidding me? The only good thing they ever did was share a split with Mogwai) wasting their way through a sunshiney, shimmery version of "Space is Deep." It sounds like something off a fucking Blur album and if i need to tell you why that's a bad thing you aren't the audience i'm looking to reach with these reviews.
So what the hell is good on this record? Anything? Yes. The highlight here, and near worth the price of admission, is Bardo Pond's staggering, mountainous, monolithic wade through the venomous sonic sludge of "Lord of Light." This is prime Pond, an utter vomit of a track, oozing filth and crusty distortion while squeals of rotting wah-horror work their way out from underneath. Isobel's vocals and flute playing are both eerie and angelic, adding a sure sense of beautiful unease to a ten minute metallized funeral dirge. Fucking amazing, and nice to hear Bardo Pond coming this crushingly again. Mudhoney take a punky spin on "Urban Guerilla" and slow it down a bit in the middle to get cosmonautical, reminding me quite a bit of their take on the Spacemen 3's "Revolution" from a few years past. I can't really call their work here psychedelic but it certainly caters to what they do well-amped up garage fury and overfuzzed Fender abuse. Acid Mothers Temple pop up as well (marking their second appearance on a Hawkwind tribute) and supposedly cover "Brainstorm" but it might as well be any seven minute freakfest excised from one of their own songs. These days i feel i'm getting shorted if i'm not hearing AMT in at least 20 minute doses so i can't really count their contribution a high point-it's more like visiting an old friend and catching up over some fantastic coffee and nostalgia. Previously reviewed stumblers White Hills come barreling out towards the end and work up a psych-cloud out of "Be Yourself" while adding another notch to the "quality" side of their tally for me. Not sure if it can forgive so many grievous and boring missteps but it's a fun six minutes to say the least-all roaring guitars and scathing, arcing feedback shaped into huge, glistening bubbles of grime and smoke, drowning out every other instrument until it all fades into a near-folksy jangle. Lastly, the overhyped stumble-psych Moon Duo blow through "Hurry on Sundown" in fittingly narcoleptic fashion, crafting a bit of AM radio minimalism over which to throw down a skronked out crumbling fuzz solo. It's a little too Velvet Underground for my tastes and doesn't do much to distinguish the duo from their full time gig in Wooden Shjips but it's rendered nicely in shades of grey and almost soothingly hypnotic enough for me to dig it.
There you have it. Should you get this one? If you really love Hawkwind, probably (and hell-i might not love them enough to make an honest appraisal of this album) but if you're just looking to hear some good psych damage there's plenty of other places to go. For me the Bardo Pond track cements this one (and let me say again, just so you know-their track fucking destroys) but there isn't too much else to recommend it. I think Neurot's tribute from a few months back was far more interesting as well as sonically devastating and the rare "Underground Daze" tribute double album does a much better job capturing the scope and spaciousness that Hawkwind's best work summoned up. This is just a quick little orbit around the moon.
Posted by Cory at 4:15 PM