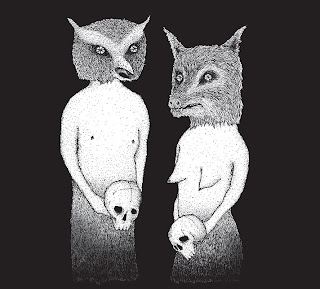 Endurance testing 74 minute wall of noise by an ensemble boasting two drummers, three guitars and a swarm of electronics. This is the same line-up that recorded Jazkamer's epic forays into progressive black metal (at least i think) but it's metal in an interpretative sense only, and then very loosely if at all. It's fucking heavy, and it has a bleak aura of punishment buzzing around it like flies to a putrid mountain of discarded flesh, but it's utterly without form and structure. It's one hulking, stinking mass of sound meant to willfully dominate and force understanding.
There's two major touchstones here. One is Skullflower-the eruptions found within are distinctly Bower-esque in nature but the relentless onslaught of drums forces some sort of detachment from the influence. A keener sense of appropriation is felt by considering the recent box set by Merzbow, "13 Japanese Birds." Here Merzbow went right for the throat and unleashed not only the typical torrents of tape/feedback decimation but also a battery of free drums, creating an atmosphere of heavy metal meltdown. Jazkamer have taken this sound to heart and turned in what may as well have been the 14th installment. It doesn't make it any less enjoyable in my eyes, nor does it diminish its impact-it's just where this music is coming from.
Two untitled compositions, a blasting inferno of noise grandeur and pure electric self-indulgence. The drums on this record are insane, flying everywhere, placed in all sorts of places in the headphone mix. You are completely surrounded by percussion. Layers of crust and grit and belched up free-form detritus surface incessantly but it's the drums that dominate, forcing you to pay attention and eliminating any hope for subtle transcendence. This album exists only in the now, its immediacy rivaled equally by its ferocity, demanding your engagement. This is the focus for the entire time you've got it on. Everything else disappears, recedes, decays, drops away. This is nullification. This is purification. These are the cleansing flames of rebirth and a whitewash of memory. It's a seventy four minute sonic lobotomy. I'm looking to get my hands on the second album of metal theatrics from this lineup to see the contrast but for now this is as metal as it can get, really. The idea of metal is sometimes more important than the actual sound. You've got to truly appreciate the genre to make it work, but for the few capable hands constructing it (for the few ears capable of really getting it) this is total worship and dedication. Jazkamer are one of the few noise projects able to dip this deep into the fetid pools of rock and emerge with consistently worthwhile material. Call it blackened prog-noise, call it sheer thrash abstractionism, whatever- this shit is awesome. Heavily recommended for anyone into Merzbow, Kevin Drumm or Abruptum.
Posted by Cory at 9:44 AM

Just thought I would comment to thank you for all the great posts. I've learned about a lot of artists from this blog, which I originally found via searching for kevin drumm shit, who I see wee share a love for. Also I especially dig Obliveon. Nemesis got me into metal. My goddamn head has been rattling (fuck yeah).

Thanks! I'm glad the writing is serving its intended purpose.