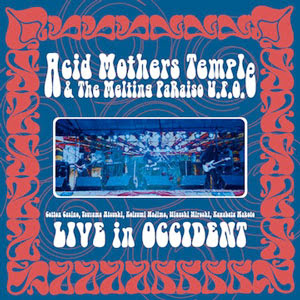 Another gorgeous re-release from Essence Music, this time rescuing the very first Acid Mothers Temple live album from nostalgic oblivion and illuminating just how little this group has changed in near two decade of existence. Appearing super early in their discography, "Live in Occident" shows AMT doing what they do best-flying off into noise-streaked tangents of head-nodding psychedelic excess, with little regard for touring behind an album or even having some sort of "songs" to play (aside from the quintessential AMT track "Pink Lady Lemonade," which does appear here, maybe for the first time); the resulting record is simply another demonstration of AMT's live abandon, slightly more woolly than usual but nothing out of the ordinary.
This is the sort of record that makes up 80% of the merch booth at an AMT live show. There's nothing you haven't heard before but you have to fucking get it because it just might be something you haven't heard before. Across hundreds of releases the quality of these live documents has remained astoundingly high-there are few, if any, live albums by AMT that i would consider weak or tepid. Some are more aggressive than others, but it all depends on the band's mood at any given recorded performance. Having seen the band umpteen times live, it's easy to tell when they're in the zone and when they're simply going through the motions. Both make for fine concerts, but one can be revelatory to the point of transcendence. The other is just another exploration of outer space's deepest wastes.
"Live in Occident" is a little more the latter. As a live record it's quite visceral, maybe one of the more in the red performances from the band (more than likely still carrying vestiges of the PSF aesthetic shown on their first few records) ranking near the top with the "Hotter Than Inferno Live in Sapporo 2008" release from the AMT Cosmic Inferno unit. The drums are thunderous, the bass a gooping wobble, the keyboards and synthesizers all bleeding into the ultimate saturnian howl and whine. Kawabata's guitar screams and skronks, shredding itself into bleeding chunks of postmortem metallized obfuscation. The folk leanings are completely absent here (to a certain dismay; what's an AMT show without "La Novia"?), the record given over almost entirely to fuzz-bomb distortion and effect-heavy mind fucking; this was AMT out for blood. The only real respite comes in the aforementioned slog through "Pink Lady Lemonade," obviously in the infant stages here (i've witnessed performances where the band riffs on it for near an hour) and plagued by delay-pedal problems and a general lack of direction. There's no huge guitar solo, no real growth across the track, and very little of the open sense of wandering that seems to accompany more modern approaches to the live centerpiece. When those ringing guitar lines come in, you're ready for a journey-here the road dead-ends after a mere seven minutes, consumed by the roar of decimation and the band's apparent need to melt faces at 1000 mph.
"Pink Lady Lemonade" aside, the rest of the record is serviceable, if not essential. The blanking redundancies and krautrock guitar eruptions of "Astrological Overdrive" are hypnotic bliss, and the end run tears through "Speed Guru" and "Lucille" should more than satisfy anyone looking for brain-melting psychedelia and multi-color psychic splatter splashed across their consciousness. This album is more or less the template for everything that would come after, and in that historical sense its value is near inestimable. Essence Music, as usual, has done a superlative job in reintroducing this record to the ears of the world, packaging it in an oversized heavy-stock mini-gatefold style jacket that faithfully reproduces the original artwork. "Live in Occident" is worth it as a fetish item alone. Beyond that, completists (myself included) won't be satisfied without it; for neophytes and understudies it's not a bad place to start, but there's more varied records allowing for the band's myriad talents to shine. This is just another live record by a group whose discography is littered with them, struggling for true distinction amongst the throng.