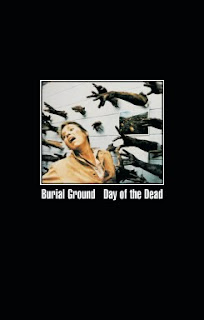 At its most intense, fear becomes a constant. Infinite, without recession, an unfocused stumble to the nearest exit, a heady mixture of adrenalin, sweat, tension, and pure white-heat terror. Few film cycles have captured this idea of non-escapism as well as George Romero's zombie mythology, and now Burial Ground has taken those films as inspiration for a series of HNW recordings that reflect the blood-soaked violence of the genre while highlighting the total blind fear and caustic sense of looming death felt in the celluloid depths.
I honestly can't think of a better idea. Film and cinema are closely tied, and this pairing works so brilliantly that i feel i barely need to describe its intricacies. Romero's films are about fright incarnate, the point at which the human spirit is driven to think only of survival. Every option save for one is removed; the world as we know it recedes and becomes something totally alien and hostile, our only choice to map out its coordinates in blood splatter and the resounding crash of shotgun shells booming in the air. It's an aura of suffocation oft imitated but never equaled, a depiction of humankind as potential provender, as pure an evocation of will as has ever been put to screen.
Burial Ground only seeks to echo this notion. "Day of the Dead" is a total immersion bath, a scathing blast of blackened crumbling wall electronics that reduces the world to the very narrow point of what's truly immediate, an illustration of a moment in which you're forced to contemplate the reality of your own messy end and decide whether to take action or submit to evisceration and memory. It's done with an animal intensity, the tar-shrieks of the wall forever rolling forward, threatening all that stand in its inevitable forward path. There is no ignorance; there is only the choice to resist by the bloodiest means possible. Compassion has to be erased and primal aggression must be embraced, the very human essences within have to be silenced and compartmentalized in order to continue. This recording serves as a question to each listener personally: could you? The cost is a willingness to accept forever grey, an agreement to exist in this carved out endtime of viscera and shattered brains, to hold hands with violence and the regressive instincts of all living things. Kill or be killed, black and white, living and dead. Burial Ground's world is one of complete and total extremes, with on middle ground to gravitate towards. Neutrality becomes an impossibility, or maybe an actuality, depending on how you view death and survival. The philosophical complexities suggested by this recording (and its film source) are staggering and cavernous.
Across a span of an hour, the wall becomes a force of sonic nullification, a totem of living electricity and crumbling rocks that seem to fall out of the invisible depths of the sky. There's no peace, no respite; the only tangible demonstration of emotion comes at the beginning of the piece, where a bit of the film's haunting synth figures give way to utter annihilation. That soft moment of frightened contemplation, that doorway to the bloodbath reality of personal minimalization and cosmic inconsequentiality, becomes almost more anxiety-ridden than the impenetrable black cloud vomit that follows. Like a bullet separating brain from skull, ending all remnants of intellect and therefore humanity, the wall slumbers over everything in its path. Everything before it is consumed, everything is sacrificed. The notion of strength in adversity is made to stand before the cold obviousness of true obstinancy, the eye of endlessness cast wide. All figures are painted in shadow before that gazing mass; all are cast beneath the choking dirt of what must be. The will is a very human concept made to hold against that which seems insurmountable; Romero and Burial Ground both understand that will can be broken, collapsed, immolated. "Day of the Dead" is that break; reality is hopeless. Eat the gun or feel your flesh flayed and torn away from you. Highly recommended.
Posted by Cory at 9:07 PM