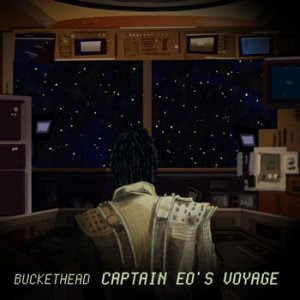 Supremely somber and understated Buckethead album, standing in stark contrast to the attempted emotional manipulation found on "Shadows Between the Sky." This is where the shit gets real; the feelings here are pure and intense. Even though "Captain EO's Voyage" is also about restraint, the gravity of its ultimate intent allows it to ascend to something other than simply another release.
The cover art makes it pretty obvious, but this record is one of Buckethead's tributes to the late Michael Jackson, paying homage in both sound and image to Jackson's sci-fi affinities. Jackson seemed capable of movement not of this world; he was certainly viewed as alien (towards the end) and appeared entirely out of place at any given moment. In his art he was a wizard, doing things no one else could do. Little wonder Buckethead felt such closeness to him; as a child of the 80's he was no stranger to Jackson's artistic output. The "Captain EO" film was a high point in that output, fusing together the talents of Jackson, George Lucas and Francis Ford Coppola along with Disney to create a sci-fi spectacle that sought to totally immerse viewers in the future. I remember seeing it at Disneyland when i was 10 years old and feeling like meteors were headed right for me; it seemed magic then.
Buckethead doesn't exactly capture that feeling of removal and magic but he does turn in a record that both mourns and exalts Michael Jackson, crawling through a grinding set of songs heavily indebted to the dub tradition (if you've ever seen Buckethead live you know this is a huge part of what he does) while sacrificing none of the aching melodicism that defines his strongest work. "Captain EO's Voyage" is severely minimal by Buckethead's standards; most songs are comprised of little more than simple, thudding bass lines and static, closed drum patterns over which Buckethead layers quizzical and vaguely spaced-out guitar work, pulsing through the cosmos and snaking around the few spots of life existent in the void. The entire affair has a narcoleptic, hypnotic effect, grasping you by the hand and pulling you out into thick masses of stars and dark, a comet through the nothing, a light amongst all the black, calling for you and guiding you through so much unknown. Even the title betray the hopefulness at the heart of the work: "Light," "Infinity Appears," "Trails of Moondust," and the beautifully named "Dancing the Dream." All of these point to the wonder found both in science fiction and Michael Jackson's work as an artist, referencing a world of possibility available to those brave enough and daring enough to try for it.
This is one of my favorite recent Buckethead recordings. It's different, it's thematically rich, and its played with total conviction and dedication. It's perfect for late listening with dim lamps bathing your bedroom in red; maybe the television is feeding static to the night and the low hum of electricity charges the night. This record can take you on a journey; like the huge open window gazing into the reaches of space on the cover, "Captain EO's Voyage" shows you an expanse stretching into infinity, an affirmation of imagination that's as moving emotionally as it is sonically. These are the hidden worlds that exist in all of us; these are the fields of invention that lay spread out before us, vast and accepting. Buckethead's tribute touches on what was best about Michael Jackson: his willingness to take risks, his utter individualism, and the ultimate strength of his vision. The body of work will outlive the reputation; the power of what he left behind leaves no room for argument.
Listening to this album, i feel like i did as i was sitting in that theater in Disneyland. I was wide-eyed, fixated, totally engulfed by the grandeur of what was before me. I didn't totally understand it, i couldn't exactly put it all together, but i knew it was special. I knew it was magic. When those meteors flew towards me a felt like i was in space; i ducked and dodged and felt the breath going out of me. There was immediacy; there was fear; there was excitement. I felt alive. I felt the enormity of the world and i felt how small it was compared to beyond. There was so much. So much to explore, so much to feel, so much to create. It was there, and it was mine. It was everyone's. Buckethead captures that. This record is a stunning testament to the possible. Highly recommended.
Posted by Cory at 4:46 PM