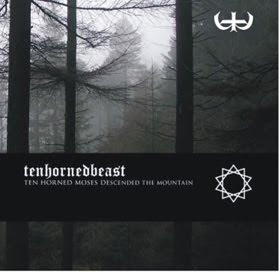 Tremendously powerful elongated work of time stretching minimalism courtesy TenHornedBeast, trading in much of their usual extremism here for a trio of records that open up a ripped fabric of meditative consciousness reaching for the darkly sublime. For me this record stands near equal to Eliane Radigue's masterful "Trilogie de la Mort," grasping for the same hidden endlessness buried amidst the cosmic drift, a desire to make sense of our most shattering experiences and render them into something emotionally resonant and larger than our senses of self.
Each record has a distinctly different tone. The first record, "Choose for Yourself the Might of the Earth," is the most aggressive and dense of the three. It trades in mist and shadow, loaming across a barren wash of sonics rife with crevasses and gulfing ravines, the pitch black eruptions of torpor rising to the cracked surfaces like so much forgotten alchemy. These are rivers of detritus, flowing free and obtuse, threatening you with the unknowns that lurk in the bends of the infinite. This piece perhaps owes most to TenHornedBeast's usual aesthetic, with an emphasis on darkness and malice, here tempered down into a constant rather than a split suite of loosely connected rumbles.
Record two, "Celestial Pathfinder," is altogether more inviting. While still shot through with industrial strength tension, this is where the contemplation truly begins. Whirring sounds circle and repeat in on themselves, creating an effect akin to the recordings of LaMonte Young and Marian Zazeela-the tones become truly droning and eternal here, the screams of feedback wrestled down into earth, sky wrought into soil and transmuted into vibration. It's a stunning piece, one that both calms and sets on edge across its 65 minute span, resulting in a troubling haze that soothes the mind and sets the skin to crawl. If you could imagine yourself living inside a giant gilded horn, blaring gold and endless, you'd begin to get an impression of the environment on display here. Even the heavens have their pockets of darkness; here those hidden areas are opened up for you, the temptation of exploration too much to bear. "Celestial Pathfinder" is a promise unfulfilled, an audial trick where the atmospheres hide the true meaning.
The set closes with the third record, "The True Voice of God is Silence." Easily the loveliest of three works as well as the one most indebted to the Radigue brand of minimalism, the sounds here are pulsingly alive, nearly jumping through the speakers to enshroud you. Crackles and exceedingly high pitches fight through a soupy trajectory of thick, brittle drone that lilts itself ever downward towards a bottom unknown. Like rotting flowers or the vaguely sweet and sour smell of curdling milk, this third record finds TenHornedBeast clutching the listener tight under a blanket of rancid aromatics and haunting, airy figures that seem to dance away just one step ahead of you. The dance is worrisome, the smiles cracked and taunting, but the beauty so mythic and enthralling that you have to follow. You may stumble and trip, you may fall into vines and brambles, your skin may crack and sting and bleed, but the frail and austere gorgeousness of the piece ensures the worth of the endured punishments. This is the slow and steady drag into the realms beyond sleep, the pulling of consciousness to achieve the pure astral weightlessness, void of physicality and teeming with the true enlightenment, a descent into nonbeing that seems to stretch out into the forever, into the great and wasted nowhere past the stars.
To come back to a comparison with Radigue's three record journey, "Ten Horned Moses Descended the Mountain" looks to nullify and condense whereas Radigue's piece looks to pull upward and outward. This is a towering work of blackened drone aesthetics, a new standard by which much of the genre's future output must be judged. Like Radigue, the thematics here are as important as the sounds and the two work in concert with one another, creating a hallowed sphere of sonic philosophy as concerned with immolation as it is with transcendence. TenHornedBeast are out there exploring the beyond, bringing back frozen chunks of physical emptiness and negative space and transforming them into something frighteningly attractive. The pull is near inescapable for those seeking to go beyond. Those grounded will immune themselves to these crushing silences, forever lost to the true awakening. Actualization begins with questions; TenHornedBeast will carve the answers out of you. Highest possible recommendation.
Posted by Cory at 5:39 PM