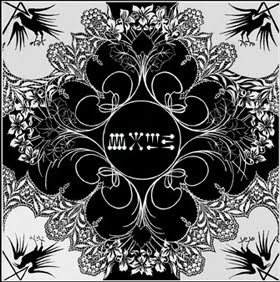 Crucial Blast reissue of Wold's explosive 2004 demo, an almost unholy fusion of black metal aestheticism and blurred wipeout noise that heralded the coming of a severe new voice in the black metal underground. "Badb" is nothing short of amazing, as essential now as it was originally, the ideas explored within having been co-opted by a dearth of lesser practitioners and calibrated into something nowhere near as potent as the distillation Wold themselves achieved. This demo laid the groundwork for "Stratification" and easily ranks as the band's second-finest work; its fury and passion simply obliterate the good majority of modern black metal by way of sheer force and tenacity of vision. "Badb" wasn't just a mutation of the black metal form; it was reinvention.
Aside from its intensity, "Badb" was Wold's most orthodox effort. The influence of the old masters like Gorgoroth and Darkthrone is felt here more strongly than on any Wold effort to follow; while much has been made of Wold's harnessing of black metal blizzardry to form their unique sonic worldview, less effort has been directed towards actually placing Wold in the traditional black metal context. While the band may have bent the aesthetic into contorted formations of its obvious expectation, the simple blunt trauma of black metal's refutation has always been present. "Badb" makes that rebelliousness abundantly clear from the onset, as waves of screeching horror scar over you like wounded detritus windblasted across the empty Saskatchewan plains. The purity of winter and the majesty of nature are at the forefront of Wold's approach and ideology; for all the quasi-religious psychobabble that would accompany the band's future output, "Badb" is remarkably focused in its depiction of eternal raging night and howling void.
Here Wold let loose black metal's tendency towards alienation; the actuality of a riff meant little compared to the overbearing strength found in the conceptualization of a snowstorm. Electricity pales in comparison to the might of the black, the infinite roar of the yawning bleak. "Badb" is the very center of eternity, the endless recycling of sound unto itself achieving a marriage of histrionics and undiluted terror. Distortion becomes translucence; blazes of white noise become the peaks of transcendence, cracking open the eye at the top of the world. The cosmos yields to the strength of Wold's summoning; the framework of black metal crumbles beneath the weight of their ferocity. What's left is a perfect sonic summation of the genre's power: stripped of form, the only discernible element becomes the anger, the simplicity and primal force of base emotions. Like Abruptum before them, Wold tapped the ether and came back with the sounds of the end, the audial absence of light wrought into towers of crushing rage.
Crucial Blast's reissue boasts glorious new artwork more accurately reflecting the band's vision and ideology; the hypnotic patterns of black and white ultimately congeal to a mess of blanked out space and washed out understanding. Delerium is the terminus of psychedelia, and Wold reach the bottom in a mere 30 minutes. Like a windstorm fracturing any attempt at clarity, "Badb" reduces black metal to its essence and molds it according to a rigid vision of ethics and traditionalism, the implied violence of the genre rendered into shrieks of Merzbow-influenced hyperstatic owing much to the misogynistic shrapnel of peak-era Whitehouse. Indeed, it isn't difficult to imagine "Badb" as the soundtrack to murder; whereas most modern black metal goes for the insular reflection of suicidal despair or existential angst, Wold turns it completely outward and offers up a anthem to carnage, the ultimate embrace of selfishness and self-actualization. Individualism is the only value worth promoting; culture is a poison. Society reeks of banality; community is as illusory as cooperation. Act as one for one or relinquish the right to exist. Wold's ethics are provocation. "Badb" pushes those ethics to the forefront, yielding a work of intense thematic complexity and philosophical muddiness. Being is as you make it; don't waste the experience.
Posted by Cory at 7:26 PM