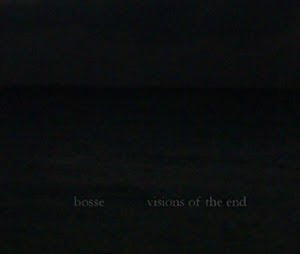 Richard Bosse's music is beyond unique. Contemplative, natural, void of any pretense, and possessed of a lush tranquility that somehow manages to unnerve, his records are demonstrations of the lulling power of repetition and layering. Bosse builds tiny walls of guitars that become towers of aching beauty and restraint, at times recalling the majesty of "Kveldssanger"-era Ulver or Drudkh's recent "Songs of Grief and Solitude." Bosse has allowed this association with black metal without actually resorting to any of its touchstones; despite a split tape with Trancelike Void and a previous release on Those Opposed records (part of their "Desolation Propaganda" boxset alongside depressive destroyers Lyrinx, Austere, Isolation, and Nox Inferi) the project has always followed its own distinctive path, an exploration of solitude and loneliness spiraling into works of immense beauty and resonance. The emotional element of Bosse's work rivals that of any of the bands he's been paired with; in that regard, Ars Magna is the perfect label to release "Visions of the End." The intensity of Richard Bosse's personal vision suits the label's focus on reflection, be it violent and destructive, expansive, or inward.
Consisting of six untitled compositions, "Visions of the End" is easily Bosse's most approachably gorgeous work. Echoes of neoclassicism, post-rock grandeur, medieval madrigals, and elegiac psych folk are all woven into a drunken mesh of lament and hushed loveliness, guitars clouding over with melodious drones and glacial washes of darkened ambience. The record has a stateliness that defies categorization. At times i'm reminded of the more conservative side of Mogwai; other moments recall the autumnal splendor of Eona's "Croyances Eternelles"or the Rose Ensemble's masterful "The Road to Compostela." These are meticulously crafted compositions aimed to elicit very specific emotions and feelings. If you give yourself in to them, they will wrap themselves around you and utterly envelop you in their ethereal, baroque grasps. These songs are cloaks, wisping shrouds of fragmented memories and assembled regrets blossoming into full-on marches towards sorrow. The inherent, consuming sadness present in these recordings is astonishing, and a wonder to take in. Bosse achieves true, pure, transcendent beauty on "Visions of the End"; the hopelessness offered here is tempered only by the twilight elegance so apparent in Bosse's aesthetic.
Much in the same way Obsequiae base their music around medieval counterharmonies and Renaisssance structure, arriving at an entirely new vision of black metal that transcends its primal influences, Richard Bosse reaches deep into history and imbues his music with something utterly timeless and transformative. This is affecting music; this is soothing music; this is the sound of regret, anguish, contemplation, anxiety, and understanding crafted into something completely open and willing. This record will give back what you bring to it and more. Its expanse is near immeasurable, its depth and resonance frightening in their combined severity. Like drowning, like every color at once, like negation, like emptiness, like triumph. Bosse reaches a level of emotional connection similar to that achieved by Sigur Ros: free of influence and removed from any conception of what their music should be, they allow themselves the openness necessary for true communication. "Visions of the End" wants that level of connection with the listener. The willingness, the openness-that's left to you.
Posted by Cory at 9:52 PM