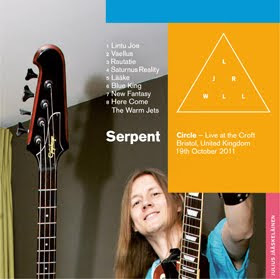 Another new Circle live album, capturing a fairly intense set circa fall 2011. The recording quality is absolutely stunning, as though you were front and center sweating it out with the band and banging your head til it was fucking rubber and blood. For an hour's worth of performance Circle seemed intent on going all out here-this is probably one of the most aggressive sets I've heard in years without resorting to post-metal theatricality-and the sheer audial spectacle of "Serpent" is more than enough to recommend it, but this is more than just a new live record from a group whose discography is littered with them. This is a demonstration of the awesome communal power of dynamic energy, a transmutation of collectivism wrought into raw kinetics.
Warming up with "Lintu Joe," a meandering progressive number replete with interwoven discordant guitar damage and a seemingly open structure, the band barrels into "Vaellus," laying waste to any pretense of a "Telescope" or "Forest" type evening. There is no room for introspection this time-Circle came to fucking rock this shit under a tidal wave of New Wave Finnish Heavy Metal, and they go at it with aplomb and abandon. "Vaellus" is all crushing power chord majesty backed by a rainbow splurge of scorching keyboard, devolving into a tangle of harmonized leads that whip themselves back into fist pumping chorus modalities. It's eight minutes of pure metallized bliss, the scorching crunch of mutated thrash by way of mid-80's chart-hungry Judas Priest. "Rautatie" appears here again, commanding near 20 minutes of weirdo space enchantment and flippant schizo vocal posturing, a scat devolution of elongated histrionics that showcases the fucked-up side of what Circle can do when they want to be "exploratory." "Saturnus Reality" blasts out of "Rautatie"'s wind down, a furious blaze of ripping hardcore bordering on black metal, near three minutes of total upheaval with no disguise. It's awesome to here Circle embracing this sort of punk antagonism, yet another side to the multifaceted infinitity-a-hedron the band has honed itself into. "Laake" slows things down a bit, dispensing with the breakneck pace of "Saturnus Reality" in favor of some Ted Nugent style swamp riffing, a sleazy stomp across overly familiar rock and roll stomping grounds. It's overtly formulaic but not unenjoyable. "Blue King" and "New Fantasy" continue the regression, a wheezing descent into the band's final movement, an orchestration of adulation that more than merits this record's purchase.
The band's final track here is a ten minute run through of Brian Eno's seminal "Here Come the Warm Jets," an epic build up of gorgeous pop simplicity that rages itself into a dervish of breakneck power chord thrashtasms and operatic vocal skyscraping, a window onto the carved out ceiling of the universe. Circle stay incredibly true to Eno's original, amping up the rock fury of it and playing deep into the subtle menace of the track without going to far out into the metal realm with it. It feels like a natural extension of where Eno would have wanted to take the track, an excursion into the deep end of the rock/ambient pool, a pit of sludge gone off to die, a white star black hole born of grandeur and a joyous ache. Circle's delight in shredding this track is evident, and listening to it you wish it was 1000 minutes longer, and endless repetition of the massive final riff looped into oblivion.
While there's nothing here that reinvents the formula or pushes Circle's trademark sound any further, it's still an astonishing live document by one of the most interesting and unpredictable bands currently operating on the fringes of metal. You never know what Circle is going to do, and that's incredibly exciting. They're both mysterious and evocative, hidden but available. Their penchant for oblique and bruising meserization reaches an epic high on this set. This is a band that's capable of virtually anything, and superlative live records like "Serpent" stand as the irrefutable proof. The world knows no limits. We exist in an idea of expanse. Don't let conceptualized definitions restrict the possibilities available. Explore, explore, explore. You can stare into the sun, and the lights are fucking beautiful.
Posted by Cory at 10:29 PM

Would you be into sharing this hombre? Perhaps a trade?