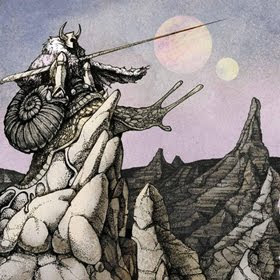 Slow motion syrup drip from across the sea by way of Conan and Slomatics, a crushing unity of minimalist rock throb harnessing the dwarfing power of distorted bass. Like a beamed in message from some transdimensional epoch since past, the warping haze of the sludge whipped up here casts a spell of goopy obliteration aimed directly at the quivering flesh. Skin trickles and sloughs, exhaustion creeps in, and the glaring cough of the sun drenches your eyes as you helplessly gaze across a dead, wretch desertscape. Make no mistake-the cover art here is fucking spectacular. But the music contained within more than fulfills the promise made by the accompanying inks and colors.
Conan open the set with three tracks of their meandering, quasi-hypnotic stripped down approach to the low end. Fresh off an EP on Aurora Borealis, here the band dials in on a narrow wavelength and stays true to the path defined by their previous work. Slow, lurching melodic basslines, jazz-inflected drums that skip, stutter, and lope drunkenly across your ears, and a scathing vocal that owes far more to Tom Araya's aesthetic than anything even approaching melody. Imagine Kyuss sans guitar, given over completely to the sanctifying tone of pulsing bass amplification, and you're getting there. Take all the overt heaviness out of that and you're left with nothing but the idea, and that's where Conan thrive. Opener "Retaliator" is an illustration of post-refinement by way of archetype reappropriation, the vestige of tunefulness bowled under an expanse of molten sludge and pounding, tribal drums. There's an aura of restraint in Conan's work that yields something akin to mesmerization, a willingness to allow the band more space than you'd give your average doom merchants or sludge slingers. There's a touch here, something delicate amidst the crumbling, driven fury. It's a different take on a familiar formula, and it propels these three songs into a higher realm of quality than you'd expect.
As good as Conan's slaying side is, Slomatics takes it further out and does it a tweak better. Of interest to me primarily for sharing space with the godlike Like A Kind of Matador on a split that regrettably never came to pass, the band traffics in a slow motion gruel that hearkens their Irish rock roots (the melodious harmonization of Thin Lizzy) and throws them against the belligerence of abrasive contemporaries like the Electric Wizard or Bunkur. Whatever room to breathe was afforded by Conan is completely vacuumed out by Slomatics, who erect a veritable wall of bruising distortion and thudding, aching drum terror. The vocals are an echoed out wreckage of void, a faraway cry of disgust and contempt, like the reverbations of a lunatic in the hollows of space. Slomatics favor a tongue in cheek classicism that isn't afraid to indulge in the approximation of solo guitar heroism or the grandiosity of compositional excess (again ala Thin Lizzy); somehow they're able to transform those tropes into something that sounds like it belongs in the annals of doom without taking itself so horribly serious. This isn;t suicide music or a rite of personal mourning; this is simple science fiction battle metal, the kind of call to arms that would fling you onto the nearest giant snail with halberd in hand. It's pretty fucking phenomenal.
Burning World has put together a fairly exceptional piece of work. These two bands go together, each one a perfect complement for the other. This isn't cookie-cutter musical matchmaking like so many black metal CDr atrocities; this is a well-thought out and conceived commission of work from two outer-genre doom metal revisionists. While there's enough slaughtering heaviosity here to feed a galleon of misanthropic gluttons for days, there's also a complexity, despite the instrumental minimalism, that appeals to those looking for a more intellectual approach to glacial movements. Like tar sliming down a mountainside, this shit will leave you charred and melted away. Lava flow dread and apocalyptic sludge prophesy masked as mere monochromaticism. Bathe in the lake of lack.
Posted by Cory at 8:47 PM