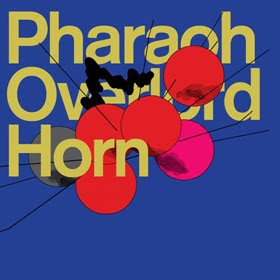 Easily the most purely rock-oriented effort from Pharaoh Overlord since 2004's "The Battle of the Axehammer" as well as the most narrowly defined, "Horn" captures the band at a 2010 gig in Finland totally laying waste to any idea of complexity or intricacy in psychedelic music. Turning in four behemoth tracks, the band endlessly recycles one two- chord riff, starting off with a cover of the Spacemen 3's seminal "Revolution" and devolving into the chaotic reductionism of "Sky." This is an aggressive set by Pharaoh Overlord's standard, veering dangerously close into Circle's NWOFHM territory with the emphasis on vocals and structure-the riffs become so polluted with repetition and layered guitar the songs seem completely alive and charged, leaping off stage with throat-slashing fervor and a sexualized antagonism not oft heard in the usually narcoleptic drone-dirger's marathons.
Hypnotism has always been at the heart of Pharaoh Overlord's sound; the nod-off and gentle drift has been a patent part of their formula since the group's inception. The band has been less prone to meandering abstractionism than any of founder Jussi Lehtisalo's various side projects: barring the classic rock recidivism of "Out of Darkness" and the skeletal clatter-psych of "Siluurikaudella," Pharaoh Overlord have honed in on one single idea and hammered it into the ground until blunt. That bludgeoning, riff-oriented approach has endeared the band to the narcoleptic-minded astral explorers that actively seek out the transformative in music; for everyone else it's the bloated death stomp of fetid dinosaur rock, lacking in imagination and void of ideas. You're either tuned in to this and it fucking destroys you or it's the most boring shit you've ever heard in your life. For me Pharaoh Overlord are the guidebook for ascension, a willful glorification of the power of simplicity and vision to achieve a transdimensionality. "Horn" can open a door if you let it; the cosmic goop free-floating past is nothing less than the deteriorated residue of millions of minds blown and shredded away into one great all-encompassing cross-planetary stream of consciousness, a dip into the pool of life, the warm placid breath of creation slipping past your tongue and deep into your inner reaches. There is no gaudy excess or superfluous posturing, only the holy power of the one true riff, stripped to its essential value and given up in its purest form. This is an offering and a communication, a tear in the universe pulsing with an electric and overblown aura.
That this ritual was expressed on stage, in front of thousands, speaks to the band's considerable power. The majority of the material here, as always, was rooted in improvisation, the startling ability to allow the music to dictate its own path an to blindly follow wherever that presence may lead. Pharaoh Overlord (and the entire Circle camp, for that matter) have never shied away from this complication; indeed, they've openly embraced it as a means to an end, the path of obliteration and reductionism as revealed by free-form radical composition born of the moment and of the mind. "Horn" is birthed via the primal magma of rock and roll, obstinate in its infantile fury and frightening in its utter shallowness. Everything reduced to its obvious distillation. Everything rendered to its most fiery form, a great conflagration of ideological tropes and blood-spitting showmanship. Heads down, amps cranked. There is only this one truth now. There is only this one idea. You don't need anything else.
You shouldn't have ever wanted anything else.
"Horn" is going to change anyone's mind. This is a record for the faithful, not a missionary expedition into the great rock unknown. For those who were left somewhat perplexed by the recent deviations from formula, this record is a serious return to form with a renewed focus on the blatant, a fervent belief in the grandiose pomposity of rock posturing. The confident struts of Gene Simmons cross-dissolved into a stage full of fake blood dried up and crusted over, the moment and the reality. The cross-pollution of of pointless ideology and neck-shaking headbanging riffology. Grind away, recede. Grind away, recede. Repeat ad nauseam. Allow the self to collapse, dissolve. Drift into the nothing. Feel the ethereality. Forty minutes to erase your brain. The wax as law. The candles are lit. The ritual will commence.
Can you hear the amplifiers humming?
Posted by Cory at 9:35 PM