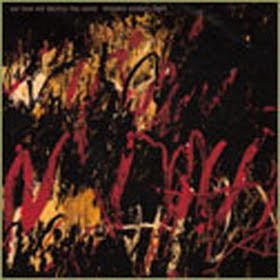 Gooped-up mess of post trance psychedelic warble from Campbell Kneale, building on the direction showcased on "I Hate Even Numbers." Whereas that record suffered from something of an identity crisis, with Kneale floundering to find the common ground (mostly unsuccessfully) between Aphex Twin and Astral Social Club, here he hits it exactly right, throwing elements of deep jungle dubstep into a blender with the raucous, wishing guitar destruction of My Bloody Valentine. The end result is a sort of bastardized "Graceland," a tripped out mindfuck that draws equally from burbling, spasmodic rainbow noise and Afrocentric rhythm. Similar to William Bennet's Cut Hands project but far less sinister, Kneale basks himself in the jubilation of uninhibited physical expression and cranks its into chainsaw grating grind plasma.
Across the space of 32 minutes, Kneale manipulates and thoroughly destroys an array of detritus, warping it beyond and recognition. "Queasy" is the perfect word-the whole affair sloshes and drips like a hurl of vomit off the deck of an ocean liner. The magnificence is staggering, the majesty drunken. Everything stumbles, trips, and falls flat on its face, the blood oozing onto the deck in a prism of broken hues and shivering tendrils of technicolor. Slices of the sky get shorn into pinwheels of evisceration, spinning and whirring in an approximation of clockwork, except every time is wrong, every second miscalculated. This is horror and distance in the worst possible way, obfuscation made possible by violent disorientation. It's John Carpenter by way of Merzbow, the complete nullification found in the very center of the color wheel. Kneale absolutely shreds his guitar, sending it into the great nocturnal beyond where every sound gets disassembled and thrown back as a fraction of its original sonic signature. The wall of torment becomes a disease of sound, a towering pile of sickness and filth rising to the surface above a hopeless, stuttering loop of empty percussion. Kneale's textures glimmer as diamonds in the dirty ocean, lights buried in mountains of shit, puke and spectacle fused into a glitterati of mammoth proportion. The immediacy of "Limbless Soldiers Flight" is a like an enchantment, a screaming wizard assault on the senses. The ripping buzz of discordance married to the "smash your face against a wall" aestheticism of grindcore. If Andrew W.K. were less of a classicist, he'd make this sort of record.
Kneale revels in the extreme. His desire for beauty pushes Our Love Will Destroy The World's sound far into the red zone of abstraction, each composition a startling futuristic regression compared to its predecessor. This is a project that just gets better as Kneale slowly but confidently sheds the mantle of Birchville Cat Motel. While the correlations will always be apparent to longtime followers, the sheer joy on display here should be more than enough to cement Kneale's stature as one of this century's most creative sonic architects. There is nothing here if not the joy of creation, a mad dance in the heart of conception running pace alongside the fervency of feverish vision. Kneale wants to dismantle the world and build it up in his own image, a grinning Cheshire cat winking at the abstraction of the sun. The refraction of vomit, the collapse of dimensionality, the ascendency of the astral. The ether is alive and throbbing, the walls are quavering and separating from themselves. The only thing left to do is dance.
Posted by Cory at 5:25 PM

Glad to hear that he's back on track; "I Hate Even Numbers" was pretty weak.

Agreed, John. "I Hate Even Numbers" was a serious "what the fuck?" misstep. It was pretty sad for me to admit that I didn't really like a Campbell Kneale record. This one is a fine return to form.