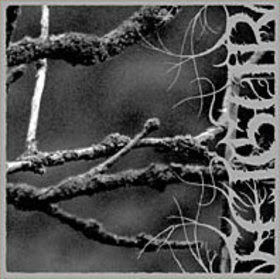 Gorgeous, hyper-washed out black metal aestheticism filtered through a hush cloud of wintry, blurred ambient, arriving at something both cavernously massive and quietly devastating. Feigur have created a masterpiece of modern sorrowful expressionism, 35 minutes transformed into a million shades grey, possessed of a tortured melancholy burning an effigy to nostalgiah and memory. Forgetting is the welcome relief of pain, contemplation is only a reminder of failure and an admission of worthlessness.
Crafted from the same sonic template as similarly atmospheric black metal isolationists Lustre, Feigur revel in the idea of black metal rather than the actual playing of it. "II, Desolation" is cloaked in a mist of hollowing reverb, mountainous and oceanic to the point where the room begins to feel like its wavering in and out of the conscious realm. Most of the music is provided via swells of triumphant keyboards and minimalistic framing percussion, with only the wisp of a guitar hiding beneath all of the rest. Vocals are windswept frostscalds sweeping and howling across the earscape, screaming to a time remembered, carving out a whole in the sense of self. The true power of Feigur's compositions and presentation is the allowance for suggestion- it's what you think you're hearing and what you personally bring to the record that makes it resonant. This is nothing new in ambient or noise music-ghost tones and illusory sounds are part of what makes HNW recordings so immersive and overwhelming for listeners-but to hear the technique employed so masterfully within the confines of black metal is a rarity indeed. Think of the raw, overbearing power of a recording like Ulver's "Nattens Madrigal" and the constant, changing buzz of the guitars-there's a disorientation at work, as well as a feeling like something's constantly transforming itself right in front of you, that's not often found in less ambitious recordings. Feigur tie these implied fluctuations to a depression-laden emotional core that makes "II, Desolation" a harrowing listening experience.
France has a knack for this sort of removed black majesty. There's something about the environment, or perhaps the culture, that births an extraordinary amount of artistically minded black metal musicians willing to subvert and challenge the ideology and aesthetic until it becomes something entirely new and darkly beautiful. Much of France's black metal output, Feigur's included, carries with it an air of the romantic and the baroque that few other bands have been able to replicate or even approximate. Feigur's dedication to such a richly personal sadness opens the door to a piece of black metal art that should appeal equally to fans of Burzum (this is the sort of sound Varg was reaching for at the very outer limits of "Filosofem") and Tim Hecker (the blurriness of "II, Desolation" is achingly lovely and haze-ridden, reeking of the remnants of what once was); so too should fans of latter-day Xasthur find much to appreciate here. The simplicity of the compositions demands that the sounds used to create them stand out and reduce the listener to little more than a receptacle for the message. Exactly what Feigur are conveying is left to personal interpretation, but "II, Desolation" is almost impossible to ignore. Superb.
Posted by Cory at 4:59 PM