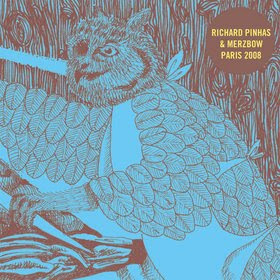 A stellar live follow-up to their massive collaboration "Keio Line," Cuneiform's LP pressing of this Merzbow/Pinhas gig from 2008 delivers a solid dose of blissed out percussive uber-drone mingled with the spacey Fripp-esque explorations of Pinhas' wicked guitar manipulations. This is a meeting of two masters, both at the top of their game and in total control of their sounds, whipping everything together into a frothy seethe of deconstructed destruction, everything taken apart piece by piece and built back up into an ocean blue swirl of gorgeous, Wagnerian noise symphonics. These gentlemen bring out the best in one another and it's thrilling to hear them churn out the magic in front of an audience.
"Keio Line" showcased an impressive new aspect to Merzbow's delivery; Pinhas' minimalist guitar stylings gave birth to a new crystalline beauty in Merzbow's approach to sonic extremism, resulting in a heady slab of syrup that felt more in league with Eliane Radigue than Aube or Masonna. This live outing continues that direction but ratchets up the clatter factor, allowing Merzbow to unleash some of the more grating tricks in his bag (even some drum programming) reminiscient of his work with Boris. Pinhas turns in what he's best at; his frigid guitarscapes belch up an expanse of warming dread, an ever-reaching blanket seeking to cover the world with the sounds of deepest space. Nebulous and bubbling over with microscopic tonalities, his guitars recede into the world that Merzbow conjures up, raising their voices in unison with the controlled frenzies willed into being by an arsenal of laptops and pedals. This is the new standard for collaborative endeavour, a reference point for any contemplation of ambient/noise intersection.
The only complaint i have is with the LP's brevity. At just shy of 40 minutes this seems like a mere taste of what these two unleashed that night; "Keio Line" was an unmitigated destroyer, a behemoth of towering texture that took as much time to let dissolve and sink in as it did to actually listen to it. "Paris 2008" seems like the afterthought to that brain trust, a quick demonstration of the magic help up for live appraisal. It's wonderful and intense but over far too quickly for my tastes. I would liked to have seen Cuneiform dole out a 2LP set of this show, but for whatever reason we just get the one piece of wax (and no, i won't discount the very plausible explanation that this was the entirety of the show.) The real meat is on Side B, where Merzbow absolutely takes over and begins to lay waste to the stage. Pinhas can barely keep up but his efforts make for an admirable tower of sound, a quick ascent to the highest floor of Babel to witness the eminent apocalypse. Massive shit that makes your head spin; the world needs more of these two working together (new studio album just came out in tandem and is well worth your time.) Totally recommended.
Posted by Cory at 4:16 PM