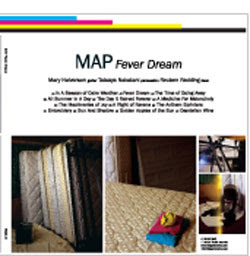 Anxiety-ridden improv that moves into places beyond the confines of free-jazz, reaching a place of open exploration and skronk worship. Mary Halvorson is one of the more interesting guitarists working in this vein; you can hear all the schooling behind her chops to the point where listening to her work seems academic. But there's a fire driving her playing that becomes more and more apparent as you listen to her various projects. Whether it's the refined composition of her quintet, the Hendrix on quaaludes style narcolepsy of her trio or her metallized chunkfests with Trevor Dunn's Trio Convulsant, Halvorson plays with a forcefulness that reaches past her classicism, bending the guitar to her will and highlighting a player whose knowledge of style is equal to her ability to work within them.
"Fever Dream" is the second outing by Map, the first having come out a number of years ago and going mostly unnoticed, aside from a few mentions amongst the outer fringe cosmonauts of improv groupings. While the first was an extremely jittery, nervous romp through start/stop time signatures and experiments in negative sound space, "Fever Dream" moves in exactly the opposite direction, creating an infinite din that is at once dissonant and hypnotizing. It's to the performers' credit that they're able to create something so transfixing out of what shouldn't be anything other than ear aggravation; there's nothing here that even remotely approaches a "groove" or the notion of song. Instead you're treated to Halvorson eeking out pockets of discord all across the neck of her guitar while her co-players indulge in background clatter-psych, the squealing of cymbals and rattling snares colliding head on with bowed bass moans to create a blurry sonic goop that Halvorson shreds across. The resultant grating noises are something that shouldn't work in such a mesmerizing fashion, but it does. The individual approaches are so light and deft that there's nothing alienating about the physical aggravations they work up together. The best stuff comes out in side three, where the fixation turns to a sort of jazz musique concrete, with Halvorson working feedback and delays on top of airy whining cymbal stretches that seem to bend time for the sole purpose of testing it. This is a record of sketches rather than songs, first takes as opposed to compositions. There's nothing less than professional about what's been laid to tape but it sounds so simple and minimal that you're left wondering if you're listening to seasoned improvisers or jazz school dropouts approximating their ideas of heavyweight jam sessions.
This is a great addition to Taiga's noble catalogue of releases; the packaging and design here are psychedelically stunning, giving a unique visual counterpoint to the sounds presented. If you're new to Mary Halvorson i would start with her trio performances instead, as they're a bit more accessible for the rock-minded, but for anyone else who salivates over Nels Cline's scratchier moments or Seichii Yamamoto's Tzadik works, "Fever Dream" is a challenging slab of grindcore-minded jazz drone.
Posted by Cory at 6:48 PM