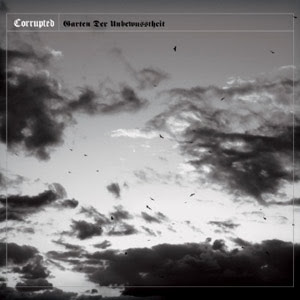 As a genre, doom metal is perhaps more prone to stagnancy than others; there's only so slowly you can play before what you're doing becomes formless. Likewise there's only so far you can downtune the guitars and retain any attempt at clarity. The worst doom metal bands bludgeon away lifelessly at two or three (or sixteen, it doesn't matter) chromatic power chords and call it artistic extremity and gravitational rejection, forwarding the notion that brutality for its own sake is enough to merit consideration in a field already drowning in merciless practitioners. The best doom metal bands escape this constraint and actively work against it, sculpting towering works of void and emotional devastation that harrow listeners and seem to carve chunks out of the sky. Units like Worship take anxiety and fear to suicidal levels of depseration; Khanate chooses to explore the ever-increasing feelings of isolation that result from hyper intelligence and immersion in the seas of modern culture; Bunkur ally themselves with staunch minimalism and seek to craft the most militant, punishing pools of sludge laid to tape; Loss plumbs the depths of self-loathing to a point where the only way out is to drag a razor blade across the wrists and say a prayer in the dark. And then there's Japan's Corrupted, a band that by this point is really doom by past reflection only. Across a wealth of releases, Corrupted have taken a simplistic, crushing, and ritualistic take on doom metal to its outermost reaches, turning in record after record of agonized cross-cultural disgust and self-reflection, filtering their music through an ever-more melancholic lens to arrive at the mountain of sadness that is "Garten der Unbewusstheit."
Roughly translated as "Garden of Unconsciousness," Corrupted turn in a strangely docile and mournful effort owing more to Mogwai and Isis than any association with doom. The closest genre touchstone at this point would be early Thergothon, but Corrupted's sound is so much more powerful than any sort of comparison at all to contemporaries is going to fall flat. Made up of two epic 30 minute interpolations of the same song and a short acoustic interlude to separate them, "Garten der Unbewusstheit" is a sour field of rotted delight, yielding a sickening stench of sweetness wasting away in the sunlight.
"Garten" leads the record and immediately sets the tone with severely languid clean guitar lines imbued with a deep sense of regret and restraint. The tone is plodding and tightly controlled, melodies repeated and cycled through over and over. Across its thirty minutes "Garten" builds up and achieves an exhausting intensity as well as a fragile sort of beauty (these are probably the most unabashedly lovely songs Corrupted have ever written) that weeps from within, growing louder and more dense as it exhausts itself but never fully opening up and giving itself over to the mammoth swathes of belching distortion that Corrupted are so famous for. This is sadness as an eternal quality, an illustration of personal defeat and resignation that uses constancy and repetition to pull you further into a sense of despair.
"Against the Darkest Days" is the interlude piece, a somber bit of acoustic guitar that echoes some of the melodies and form and certainly most of the ideas behind "Garten"; as a reprieve it works wonderfully, drawing you in with its gentle affectations even as it readies the razorblades and lights the candles.
The record closes off with "Gekkou no Daichi," a deeper exploration of all the musical themes introduced in "Garten" rendered more black and vilified. "Gekkou no Daichi" reeks of venom and sorrow, its head held low to the ground as its tears stain the earth beneath. Ruin, emptiness, and the destruction of sense of self all come across in waves as the track rolls over you, the cavernous vocals shredding away over the bleeding guitar work and measured drumming. Everything here is let loose. Speed is glacial, guitars are pulsing, seething and beyond monstrous. Bass tones here are sedentary, barely moving but turning all beneath to quivering acquiescence. Almost every line ends in wafting feedback, screaming out yearning and horror as the tendrils of sound reach out to caress the face of elegance. This is easily one of the most powerful and accomplished Corrupted pieces i've heard; the psychedelic flourishes and the embrace of texture through repetition create a composition of near infinite depth, clutching you close and dragging you ever deeper into the recesses of endless self-examination and true personal rejection. The whole record dares us to forget, forcing us to own up to mistakes and relive them in hypershades of grey and black. "Garten der Unbewusstheit" is failure reflected outward, a requiem for all that we held dear, a focus on existential angst and the pervasive nothingness hidden in the corners of our lives.
It took several years for Corrupted to arrive at this point, but it's an awesome step forward for a band that started out so simply. Japanese bands are unique in that they devour virtually every sound from every culture they love and manage to transform it into something entirely their own, often surpassing the source material. I think the United States has some serious contributors as far as artistic doom metal is concerned, but there's nothing here quite so all-encompassing as Corrupted's "Garten der Unbewusstheit." We'll be playing catch-up for years after this one, and by that point Corrupted will have probably already vanished even further down the horizon. Fucking massive, a superlative effort by any measure, and a major statement for doom metal of any sort.