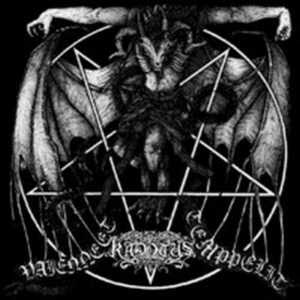 Another unexpected return from a black metal entity that more or less disappeared. Kadotus' last full length, "Seven Glorifications of Evil," was an absolutely astonishing slab of hyper melodic, ultra-raw neoclassicist black metal, revering the old masters while flying a middle finger towards the idea of black metal's growth and future. Released in 2003, "Seven Glorifications..." caused little fervor amongst the community at large; few save the true diehards recognized the strength and vision boiling beneath the baroque riffing and abrasive atmospheres. Afterwards Kadotus more or less went deep underground, releasing the occasional split or seven inch but never resurfacing with a sophomore effort, content to let the years (and a wave of pointless black metal understudys) wash away behind them, readying the strike.
That deathblow comes in the form of "Vaienneet Temmpelit," a total reinvention of the Kadotus sound and a retreat into further reaches of primeval black metal, finding more in common with the early ragged works of Bathory and Venom than the structured melodicism of contemporaries like Gorgoroth and Satanic Warmaster (whose label Kadotus calls home.) While initially the album seems to abandon all the things that made "Seven Glorification of Evil" so fucking masterful, "Vaienneet Temppelit" is just a slightly different exploration of black metal's fiery history, pillaging the sounds most associated with chainsaw violence and blackened birth to form a backwards-looking retreat into unbridled chromaticism and thrashtastic death-metal tremelo figures. This is the most atonal Kadotus have ever been, with most songs draping themselves in occultish half-time groove-riffing not unlike Teitanblood or Vasaeleth. Production is similarly reductionist, the whole affair sounding dust-drenched and buried beneath layers of grime and cobwebbed murk. As the record progresses the intensity becomes almost narcoleptic, lending an air of mesmerization to the proceedings that perfectly suits the sacrificial aura surrounding the magicks contained within. Kadotus are one of few truly Satanic BM units, crafting hymns to worship and praise as much as they are writing songs to commit to record. "Vaienneet Temppelit" feels suitably frightening; despite the somewhat comical cover art the album still comes across as being something from another system of beliefs, touching on the weird vibes you get from handling a GBK album or one of Burzum's prison recordings. There's a darkness present here, and it's slightly unnerving.
While i would have rather seen Kadotus continue down the melodic path they began to tred on "Seven Glorifications..." and the equally excellent "Twilight's Depths" EP, "Vaienneet Tempellit" is a worthy follow-up in crafting a legacy of evil from one of modern black metal's most promising projects. The purity present in the recordings summons up the spirit of rancid classical black metal, baring teeth and going straight for the throat as if there was nothing more important than destruction and the gospel of the horns. This is church-burning music, a rallying cry for those that hold the fires of rebellion deep in their hearts. Christianity and monotheism are intrusive forces not suitable to the world as is, and Kadotus are out to wage bloody, death-drenched war on all those who falsely believe. A true force of black metal fury for dimming times. Recommended.