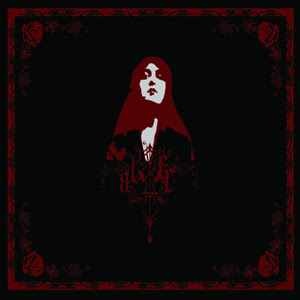 Much needed reissue of this long gone pair of LP's from Blake Green of Wolvserpent operating under his solo guise, Aelter. Taken together the two records show an obvious musical evolution as Green explores the limits of the genres he's looking to work within, crafting something resembling the wasted twang of Souvenirs Young America by way of the most compositionally majestic of his work in Wolvserpent. These two albums, "Follow You Beloved" especially, are shot through with a horror film type darkness that drips from every note and drenches you in a suffocating, hypnagogic atmosphere. An olive branch to the infinite is extended here, the only offering coming back the hallowed void of nihilism. Conjuring images of dust storms and starless, choking nights spent languishing in the desolate West of the past, Aelter successfully transcends the "Dead Man" influence and gifts us with something far more structured and frightening, a descent into a spiral of forever that bleeds black and nullifies any thought of hopefulness. This is the total bleak, and it's wide open.
Of the two, "Dusk Dawn" is the more baroque and exploratory. All manner of instrumentation is employed, lending the record an atmosphere similar to that of a dark, demented cabaret. Gone is all the crushing power of Wolvserpent, replaced with the oppressive din of accordions and overdrone, a quagmire of bizarre theatricality that belies the general waywardness of Green at this project's inception. While not entirely perfect, "Dusk Dawn" does offer up a fairly choking dose of mystery and avant-blackness; while the hulking punishment of Wolvserpent is stripped away the compositional complexity found in that project is taken to a new extreme within the expanse of Aelter. As much as Green as worked in to "Dusk Dawn" it never feels like too much; each sound is arranged and organized to serve a purpose and to paint a specific pocket of the musical enclosure a specific color and tone. There is a richness to "Dusk Dawn," a hint of magick in the corners, a whisper of an otherworld beneath the gargantua of the sound. While the title may make one think of sparseness and deserts, there's another element to those times: any photographer is familiar with the richness inherent in the dusk and dawn times, when the light is at its most naturally evocative and painterly. Green gets at some of that here, and it's a weird, winding journey to obfuscation.
"Follow You Beloved" virtually rejects everything that "Dusk Dawn" offered and delivers a a seriously minimalist mantra of darkness, hauntingly cinematic in its scope and silently breathtaking in its awe-like beauty. It feels hushed but imbued with a richness and a power, a communication with forces that lurk in the tears of reality. The two tracks here are gorgeous interpolations of wasted Americana, the folk music heard at the twain of sleep and consciousness. Across 40 minutes Green wades into the pool of tradition and emerges covered in the weight of archetypes. This music feels primal and possessed, but it's so elegiac and graceful that it's difficult to categorize it as strictly menacing. It's certainly mesmerizing; the ongoing repetition of the chiming guitar figures in "Follow You" is near enough to induce coma. But it goes somewhere past somnabulism. This is music for the astral wanderer. I can't really put it any better. This is out of body type shit, the soundtrack to the space that is neither real nor imagined. It's Third Eye ritual mixed with the fluff of the cosmos and it's a seriously heady fucking trip. The darkness Green paints with here is near impenetrable except for those few glimpses of that indefinable other: the mirage in the desert, the blinking lights in the Northern skies. The feeling of something waiting in the wings of the real, a visitor from beyond desperate to shed the confines of infinity and slither in to the purely sensual realm of the tangible. The great forever laid bare and blinding, the endlessness of experience within an arm's reach.
Aelter traffic in transformation; the question of illusion and experience and their releneltess intertwining are at the crux of these two records. Green has taken something distinctly American and wrenched into a new and confusing shape, a stab in the eye of the endless that both transports and transcends. There is something happening here; there is a hex hanging low in the skies. What pieces of the landscape with which we're familiar may very well disappear in the wake of Aelter's warm hypnotism; that sun-washed stretch of road might become nothing less than pure, unbending paths of white-hot infinity, leading past the stars and into the further. The world is not beyond your reach. All it takes is a key.
Posted by Cory at 7:24 PM