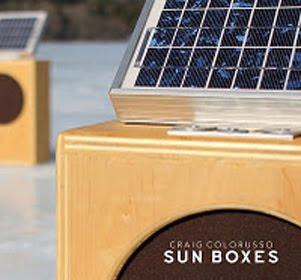 Gorgeous release from artist Craig Colorusso, providing an audio document of his art installation piece "Sun Boxes." The Sun Boxes are solar powered units designed to play a loop of a guitar note; together the boxes form a crushing B flat chord. The nature of the work allows that each installation will yield radically different results in sound depending on the sun, as well as the listener's position amongst the boxes. I can only imagine how awe-inspiring and dwarfing it would be to actually immerse myself in the area and let the boxes wash over me; the raw, visceral, and humbling power found in the two field recordings presented here is something beyond simple music, a coalescence of nature and composition that owes as much to the ecstatic truth of Werner Herzog as it does to the overwhelming beauty of Eliane Radigue. There is a communication here, a rich exchange that rewards your openness and willingness to succumb. This is introspection at its most purely physical, a journey into the very aura of light.
The two pieces here represent the Sun Boxes under different environmental stimuli, illustrating the vastly different moods and tones this installation can produce. Side One is entitled "Grassy Knoll" and effectively evokes that, with a warm and inviting ooze of drone that glides over you and makes you feel as though you're under the gaze of the sun itself. The piece moves slowly, unwrapping itself and changing ever so slightly across its elapse. New tones bubble up and stretch out as old ones begin to recede, giving a feeling of constant evolution and transformation. Colorusso has made reference to the effect of the piece being akin to Yoga and meditation, and here that comparison is particularly apt-the drone pulls you ever further inward, easing you deeper into relaxation and contemplation, taking you further and further into the outer regions of your own consciousness. I would love to hear a full length version of this; the power and depth of Colorusso's drone is near endless, and total sonic immersion would border on the transcendent.
Side Two is called "Frozen Pond" and is an equally suitable description for the piece. At once more brittle, crystalline, and austere, "Frozen Pond" moves with trepidation and fragility, cloaking itself in distance and hallucinatory ambiguity. There is no menace, nor any sense of darkness here; instead there is a beauty that seems hushed and almost vanishing. The tones are glassy and light, like a soft winter wind across drifting snow. "Frozen Pond" moves at a much slower pace than its companion piece, forcing the listener to consider the environment under which it was recorded and visualize accordingly. Were this drone stretched out to full-length duration, the effect would reach something close to severe unease. There's a "there but not there" quality to the piece that defies easy ingestion and demands constant attention; the changes are so soft and subtle that if you let yourself out of the trance for even a second the spell is broken. It's hypnotizing in the same way a whiteout is: its power lies in the repetition of the obvious, a powerful reinforcement of the infinite that renders all outside detail incomprehensible.
Together the two work as a near visionary piece of drone art. Though others have worked in this sort of simultaneous tone composition before (most notably Phil Niblock, Chord, and Colorusso's bandmate and contemporary Duane Pitre) those attempts have all been based purely in the technical, allowing for none of the natural grace that Colorusso has made such an important part of his project. This is as much about the awesome power and overwhelming beauty of nature as it is about the might and purity of sound, and by unifying the two Colorusso has emerged with something that caters to the best aspects of both, sacrificing nothing from either in the process. I'm reminded of the mesmerizing jungle in Herzog's "Aguirre"; it's a seduction and a power that simple human understanding can't even begin to approach. Only when you give yourself over to it completely and abandon every vestige of calculation can you begin to fully appreciate what's before you. It's meant to be felt on a deeper, more base level. It's emotion. There is music and poetry in being. It flows through every piece of every day of every life. Colorusso has tapped into that vibrancy and brought a piece of it back for us to behold. When you truly consider what "Sun Boxes" is communicating, the incredible beauty of it is nothing short of majestic. Highly recommended.
Posted by Cory at 3:37 PM