BURZUM "FROM THE DEPTHS OF DARKNESS" (Byelobog Productions) 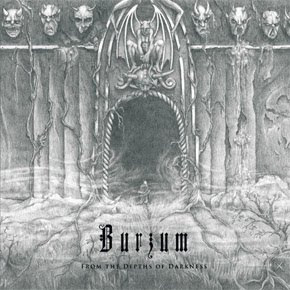 I'm not sure where i stand on this release. While i admire Varg Vikernes' renewed activity under the Burzum moniker ("Belus" and "Fallen" are both phenomenal, essential additions to the Burzum canon and black metal as a whole) this new album seems to serve little purpose. "From the Depths of Darkness" is an album of rerecordings of classic Burzum material, mostly culled from the first record, with two songs from the second. Oftentimes there's little need for an artist to revisit their earlier works; this is especially true in the case of Burzum, whose debut was so pivotal and forward thinking that there's virtually no improvement that could be made to any of the material. This record solidifies that position, offering new renditions that sound so similar to their originals the listener is left wondering what, if anything, has changed.
I won't doubt that could very well be the point of this record. Perhaps the best thing about "Belus" was that it illustrated, without apology, how little Vikernes had changed in the last two decades. Burzum picked up exactly where it left off, and there is no other band in the black metal universe that sounds remotely like them (or is able to measure up the template Vikernes created.) That begs the question, then, of the necessity of a project like this. If there's nothing new to offer, if there's no new takes on any of the material (and there isn't-the songs play exactly as they always have), and if even the sound itself isn't terribly different (Vikernes' drumming is slightly more confident this time out) then why the hell does this even exist? I'm dumbfounded.
If the point was to shed light on the actuality of black metal, the true philosophy and ideals behind the movement, then Vikernes has succeeded. It requires a deeper level of contemplation than the music itself invites, but at this point i don't feel Vikernes is attempting to reach anyone other than those who have always been with him. The spirit of rebellion is eternal, the flames of hatred burn bright. What was iconoclastic then still is today; the visionary still walks a path few can follow. I've always believed this of Burzum, and whatever Vikernes' faults as a person, the strength of the music has been more than enough for me to stand behind him from an artistic perspective.
So what is this album really? Is it ill-conceived or bad? No. It's very well-played, and the thrill of hearing these songs again, of hearing Vikernes still standing behind his contributions despite his distaste for modern black metal, is obvious. You can't create something and then say you don't care what happens to it. I've never bought that level of flippancy from artists, and i have a hard time taking seriously anyone who says anything remotely similar. Those who are driven to create put their heart and passion into what they're making; those projects and ideas contain a part of us that will always be found in it. If you're not invested there's no point. You can say that "work x" is always changing and never complete, and in some instances (the world of film immediately comes to mind) that may be close to the truth, but to completely dismiss what you've worked towards and say it doesn't matter, that is has no meaning, is near unforgivable to me. If it isn't important to you then why the fuck are you doing it? Vikernes is doing this because it's his: this is the person that more or less invented black metal (I love Mayhem too-don't get me wrong-but Vikernes' vision is THE template for everything that came after) and this album serves as a reminder of that, lest time bury his contributions under dust and fallacy. For the most part the music here rages as gloriously as it did the first time around. "Spell of Destruction" and " A Lost Forgotten Sad Spirit" both validate themselves as two of Buzum's most epic and mesmerizing compositions, reiterating the level of mastery Vikernes has over the form. Only "Ea, Lord of the Depths" fails to impress in its new guise; the slightly heightened pace does little to up the song's intensity, and only serves to pale it in comparison to its parent track. Also unnecessary are the three (!!!) intro tracks offered here, each more pointless than the last. I understand the need for mood and texture, as well as Vikernes' interest in these sounds, but here they only distract, and their collective brevity (perhaps under three minutes all told) makes one wonder why the hell they were even included. I don't need any sort of break-I've been listening to this shit for decades. Let it wash all over me; i don't need any breather.
Do you need this? If you grew up on Burzum like i did, then fuck yes. You'll buy it, listen to it, and find it worthy. You may wonder as to the actual conceptualization of it, and perhaps give thought as to why Vikernes didn't just vanish for a year or so and then emerge with new material, but you'll love it just the same. The pull of nostalgia (especially when there's still such a discernible vitality to it) is difficult to resist. If i'd been in prison for almost twenty years, i'd feel a drive to record too. These songs belong to Vikernes; they're his to do with as he pleases. I can't wait to hear some interviews about this record and get closer to the actual why. For now I have the songs, and that's enough. I used to wonder, in my early twenties, if i'd still be listening to black metal and feeling the same emotions connected to it. I do. The importance of this doesn't fade away or tarnish with time. It's eternal. If you understand that, this is a record you'll want to hear. Anyone else-this isn't meant for you.
Posted by Cory at 1:47 PM