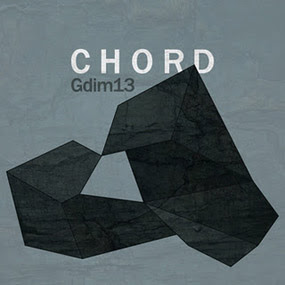 A short exploration of the titular chord spread across two polar extremes, one the room-imploding tidal slough of distortion that Chord are best known for, the other a very lovely and enveloping pillow of sound that seems as warm and downy as it is mesmerizing. This is a new direction for Chord in that these are very short pieces by the band's usual standard, and also in the narrow focus of each. Normally willing to move glacially from one end of the spectrum into the other, here Chord dives right in and doesn't let up across each piece's entire run time. The listener is absolutely made to consider the sonic gravity of the sounds before them; in this regard "Gdim13" is a heavily weighted artistic statement from a group whose very intellectual and theoretical approach to drone establishes them as peers to towering figures Eliane Radigue and LaMonte Young.
Part One is for me the more interesting of the approaches; instead of cathedral size, crushing power ambience we're given seven minutes of reflective, immersive shimmer drone. I'm reminded of the icy minimalism of Thomas Koner, but the overall mood here isn't one of menace, isolationism, or loneliness. It seems to be radiating something more inclusive and encouraging, a beckoning to bask in an expanse of calm. As usual the piece is built of individual guitars unfurling single notes/tones at an evolutionary pace; as each new guitar comes in, the piece grows in its depth and approachability. The density opens it up rather than closes it off; you're pulled further under as each new sound settles in. There are some intriguing blips and imperfections that insinuate themselves into the song's pastoral quality, but these too come off as more playful and relaxing than jarring. If this is an extension of the experiment that ended 2010's epic "Progression" (the out of place acoustic piece that closes the record) then it's a remarkable success, and i would love to hear Chord explore this aspect of their tonality further.
Part Two is Chord in full on glacial ambient destruction mode, with the guitars belching out feedback that manages to be equal parts rambling sludge and decaying lava. The tones get stretched to pure squall, the amplifiers struggling to accept the band's scorched earth policy of soundscaping. The necessity of sound as an overbearing physical presence has always been an important part of Chord's work, especially when they work in this mode of audio suffocation, so here maximum volume allows for greater detail, as well as opens the door to a voiding sense of obliteration. That rejection of the temporal gives way to the music's true mission of transcendence, and like fellow astral wave riders Skullflower and Birchville Cat Motel, the way to true vision is through true and full immersion. Suffering at the hand of volume will break the gate; this is music that fully demands you let go.
While there's an obvious question of how far Chord can take their formula (it becomes a little stagnant in large doses) the quality of the output resulting from that formula more than validates the band's continued dedication to it. While it can be a little cold if viewed as an intellectual exercise, the theoretics recede behind the overbearing power of the music itself. "Gdim13" is a welcome addition to the Chord discography, and hopefully a preview of denser works to come.
Posted by Cory at 6:56 PM