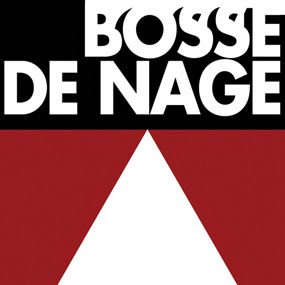 Superlative black metal revisionism, both aesthetically and ideologically. Bosse-De-Nage traffic in an extreme form of philosophical alienation redolent of power electronics acts like Whitehouse; the focus is on degradation and and the banishment of sexual limitation as key to a larger sense of cosmic understanding, the literal realization of Hell Milita's credo of "cut your flesh to widen your sight." The shearing away of the self can lead to a greater realization of one's ultimate position in the order of existence. That some are consigned to a position of "lesser" being is simply a philosophical matter of fact, a subscription to de Sade's ideal of individual pleasure taking precedence over a greater good and a precursor to Ayn Rand's fervent belief in the denial of selfishness being tantamount to betrayal of everything worthwhile in humankind. Bosse-De-Nage engage all of those ideas across the span of "ii," creating a new template for hypnotic black metal in the process and advancing the genre light years in terms of intellectual concept. This record is simply existing on a higher plane, and its hand is out for you to grasp.
Combining black metal motivation and frameworks with the spacious resolve of late '90's post rock, "ii" is a delirious tour through the spaces left open by violence and conceit, the end result of elitism, arrogance, and unleashed aggression ultimately channeled into grotesque acts of humiliation perpetrated against willing subjects. It's Slint by way of Mayhem, stopping for tea and conversation with the imagery of Pier Paolo Passolini along the way. The division between master and subject is of immense importance throughout, the sexual connotations allowed full bloom and fetid rot, creating a transgressive atmosphere that basks in the compelling warmth of terror and fright as much as it does in the cold austerity of distance. Everything is arousal; to the truly awakened, there is no act which does not contain an element of sexuality. Its exploitation is a matter for those attuned to the specific dialogues hinted at by the order of the material. Only those willing to explore further reaches are allowed access; bluntly put; penetration is a concept granted only to those individuals with the will to power.
As troubling as this exploration is, Bosse-De-Nage force their music to drive the point, crafting a 43 minute dervish that never lets up in intensity even when it's breathing in the empty spaces. Melody is subservient to vision, and vision is subservient to concept. Drums and guitars essentially take on the form of words, grazing you emotionally and intellectually, provoking response and contemplation. While many black metal acts working in this genre use blunt repetition to reach a point of transference and transcendence, Bosse-De-Nage employ repetition as merely a means; the end point is not as important as the journey to that point. This is a long road meant to inspire thought and discussion along its path; traveling alone only means an inward regression to an acceptance of the more primal states of being. The aggressive tendency in Bosse-De-Nage's music is an outward manifestation of the anger and will to power in all of us, the deeply-hidden drive towards ascendancy and mastery. The sadomasochistic lifestyle is only one aspect of this manifestation; murder, rape, subjugation, and ultimate acts of pleasure are the mirrored prism upon which such a philosophy ultimately positions itself. This band uses extreme music to imagine an extreme worldview.
As black metal, it's enormously successful. There's a subtle simplicity beneath the raging torrents, a reliance on obvious melodic figures to reimagine the idea of the romantic in modern music and transform it into something more sinister and noirish. Musically similar to a band like Grand Belial's Key in their invocation of the baroque but not as historically truthful as Obsequiae, Bosse-De-Nage seem content to flirt with extreme music's ability to showcase avant-garde viewpoints without fully consigning themselves to the practice of them. The pallor of the night and the vomit of moonlight infects this record; the acts described therein are difficult to imagine under the harsh light of day. But perhaps that inability to concede on my part is where this record is actually meant to lead; the impassioned postures of sorrow, agony, and regret may only be meant as guideposts to a total rejection of popular mores and norms. Whether Bosse-De-Nage are actually endorsing the philosophies they evoke or are simply propagating them for artistic effect is a dead inquiry; the images are there, and they're belligerently demanding in their scream for recognition. Torture as a choice still seems horribly foreign; immolation as a means to sexual gratification seems even more difficult and obtuse, but the denial of that choice's existence seems equally pedantic.
This is a stunning piece of black metal artistry. The music is jaw-droppingly angular and gorgeous, hinting at what the Louisville scene might have been able to achieve had strains of Norwegian black metal arrived in time. Beautifully recorded, totally vicious and confrontational, "ii" is an apt demonstration of the intellect and the vision fused in the act of creation. The simplicity and space present in the music open up a whole new aura of appreciation, time as a servant to inner existence. It can all stop in the heart of one individual; it can all cease to be in the blink of one willful eye. That it goes on and on and on, raging until its a gale unto itself, is testament to the anger's endurance. The state of being is inherently primal; the denial is the human definition. Bosse-De-Nage recess to a defined degree and unveil an ancient methodology that becomes a bludgeon of post-modernist conception. Narrow is the new expanse. Highest possible recommendation.
Posted by Cory at 3:20 PM