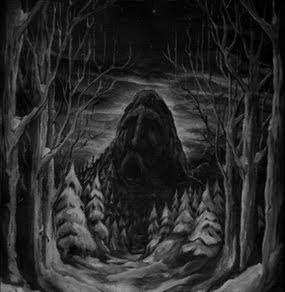 Neige Et Noirceur return with what is easily their most furious, unhindered slab of black metal artistry, forsaking almost all of the dark ambience of their work in favor of a total BM assault. Previous efforts saw the band more than willing to recede into the mysterious comforts of swirling void sound, darkness punctuated by the howl of the wind and the cloak of the night. Winter was a constant evocation, as was the crystalline glow of frigid slivered moonlight and a reverence for a world untouched by modernity; Neige Et Noirceur's musical landscapes were paeans to lupine majesty and traditions of old long since buried by the advance of society. On "Hymnes De La Montagne Noire" the band gives in fully to anger, unleashing an album of off-the-rails machine like black metal that references old masters Darkthrone in its primitive thrash aesthetics as much as it worships at the altar of time-stretching hypnotism of the type birthed by Burzum's "Filosofem."
There is no room for atmosphere here-this is total blinding aggression made up of shredding drum machine violence and severe power chord chromaticism, a potent mix of electricity and postproduction that leaves little room for contemplation. This is a record that seeks to bear down on you immediately; "Hymnes De La Montagne Noire" isn't about philosophy or history or even the shared regional spirit that inhabits so much of Quebecois black metal. Neige Et Noirceur have abandoned the markings that made them distinct and have decided to embrace full-on sonic immersion, crafting a work that desires blood and acquiescence, allowing no mercy and total subjugation. It's surprising to hear something this visceral from a unit who've previously trafficked in almost cryptically isolationist explorations of black metal's outer regions; this is a recording with absolutely no room to hide, every corner stuffed with venom and protracted rage. Like a seething fire, Neige Et Noirceur spew vitriol in all directions, poisoning all with their particular strain of extremity.
Blastbeats abound here, with virtually every song containing some extended section full of them; double bass never lets up, and the hyper-processed vocals cover everything in scars of bloody phlegm and sickness. Even the few moments of respite found throughout are charged and infectious: the ridiculous half-time rock riffage that breaks open in "La Ou Demeure La S" sounds laughable until its repetition reaches a skull-cracking breaking point and you find yourself banging along in unison with the emphases. So too with the vaguely dissoanant, math-inspired shredding that appears in "Neige Noire"; it would sound out of place if it weren't done so amazingly well. This is a band that truly understands how to incorporate influences and exploit them for maximum efficacy. Even the minor sections of ambience cut to the quick, whether it's the washed out echo guitars that punctuate "La Grande Faucheuse" or the myriad moments of acoustic strumming that arise from the ashes of the onslaught; it's all meant to forcibly remove the listener from actuality. Whereas before those transportative qualities were invoked via hazed out stretches of cold and voided negativity, here they're achieved through pure force of will, a blunt expression of astral dimensionality that lets physical punishment stand in for inner vision. The best example of Neige Et Noirceur's newfound technique lies in the opening two minutes of "L'Aube De Magicien", where mesmerizing and lovely clean guitars give way to a barreling tempest of roaring electric guitars. The two mix amongst themselves alongside scathing double bass drumming, creating an illusion of eternity that only lasts about 45 seconds. It's a masterful demonstration of black metal aesthetics harnessed for obliteration.
And obliteration is the key. This is not a record that has any interest in coddling its listeners or gently nudging them to light-soaked respites of mundane transcendence. This is a weightless howl of nothing, a dark tear in a wintry microcosm. The night stretches out, the cold cuts away, the wolves' howls grow ever closer. Soon a collective hunger will be upon you; soon evisceration will be the only escape, crimson upon a blank canvas of willing earth and dirt. Neige Et Noirceur have chosen to work under the mantle of staunch BM traditionalism, and the results are nothing short of deafening. "Hymnes De La Montagne Noire" is an electric jolt to the brain, a dense exploration of wounding sonic extremity that more than lives up to the intensity of its forebears. A bold new direction for an already idiosyncratic band, and a welcome reminder of black metal's origins.
Posted by Cory at 12:12 PM