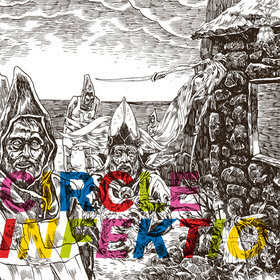 Washed out weirdo drone from hypno-rockers Circle, a pretty heavy stylistic deviation from the last several records. Hearkening back to midnight moonlight deep consciousness works like "Forest" and "Mildjard," "Infektio" sees the band touring the wastes of fractured psychedelia, marking the jagged outcroppings of structure with operatic par demonic vocal flourishes and flourishes of jazz-inflected piano. Guitar is reduced to texture and embellishment; the very notion of rock is tossed aside in favor of vaguely classical orientation and stumbling attempts at compositional maturity. This is Circle at their most reductionist, channeling the abstract and latching it to the idea of form in way that recalls the ethereal explorations of the Necks. Bits of classic rock poke their way through (as in the power chord elongation of "Maatunut") but overall this is aboriginal originality, aiming for the stars and disappearing into a wealth of deep space and lone beach fires.
Fifteen minute opener "Salvos" sets the tone for what follows, with shards of jagged guitar stabbing like icicles across a thick bed of tarring sonic goop that burbles and stretches its way into the cosmos. Power electronics by way of playful abstraction, experimentation as fostered by total ineptitude; Circle dabbles in the rot and emerges with an excursion into the outer reaches of bubbling texture. The rest of the record gives way to more "obvious" rock structure, but only as compared to Circle's vast discography: this is a stretch by a band known for them, and a certain spaciousness begins to take over the proceedings despite most of the record being jam-packed with sound. It's a concept as much as a construct, and in fitting with Circle's ever-present aura of mystery that exact concept is a MacGuffin in the service of wide-eyed creation. By turns brain-numbing (see the John Carpenter style novocaine synth work in "Peruuttamaton"), rambling (the good-time Western feel of "Pisara") and confusingly reminiscent of jagged free-jazz (virtually everything else here) "Infektio" is a deliberate mindfuck from a group known for freely and delightedly throwing curve balls at its audience.
Apart from all of "Infektio"'s weirdness, though, there's still a certain sense of distance, of unapproachability, that remains a hallmark of the Circle aesthetic. A pessimistic coldness cycles through all of the tracks here, a sort of aura reliance on the mystique of extremity and metallized drone that allows Circle to traverse a greater musical expanse than a less-wordly band could. "Infektio" clearly makes its case a journey and an experience right away, as the broiling density of "Salvos" immediately attests. This is music on a path, and the moment that first note hits your ears, you're swept up and caught deep in it. It's confounding and mesmerizing as much as it is jarring; that Circle can create that level of connect/disconnect with such isolating, polarizing sounds is testament to their strength as arrangers of the disparate.
"Infektio" is not a great starting point for Circle novices. A certain familiarity is demanded from the listener to truly open it up. There is nothing approaching the "arena" spectacle of the recent live outings, nor anything calming enough to appeal to the free-folk sympathizers that attach themselves to more relaxing pieces like "Forest"; gone too is any sort of semblance to the metal overlords found flexing their rock chops on workouts like "Hollywood" and "Sunrise." Everything here is set for the express purpose of disorientation; hypnotism is allowable only as a product of forcible removal. Dive in and drink deep of the glacial stagnancy; drift off on ripped shreds of wafting petrification. "Infektio" is rightly disease-ridden.
Posted by Cory at 1:24 PM