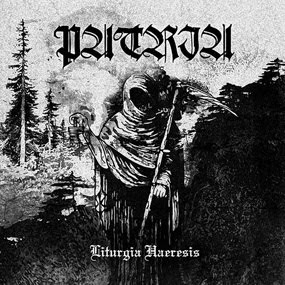 Rough and uncompromising, if somewhat derivative, black metal juggernaut from Brazil's Patria. Displaying all the tendencies of Brazilian black metal towards intense aggression, speed, and cavernous production, "Liturgia Haeresis" comes on extremely strong and then fizzles out after about three tracks, continuing Drakkar's unfortunate tendency to release full-lengths by bands that are much better suited to the seven inch format (if this had been a piece of wax comprised of just the first three songs, this record would SLAY.) As it is "Liturgia Haeresis" is an accomplished but overbearing and patience testing 43 minute tour through an onslaught of wearying melodicism and BM histrionics, more posture than substance.
Listening to this record immediately reminded me of Craft, albeit in a much more "unpolished" format. The violence and extremity are there, given an extra set of shredding teeth courtesy dusty production values; beyond that there's little else. A band like Craft are able to inject their black metal with a certain authenticity that appears to be lacking in acts like Patria. It's chaotic, it's dirty, it's rusted out and toothsome, but it's not born of history or influence. It feels incorporated rather than progressive and evolutionary; it's a creation as opposed to a necessity. The best black metal is feral, urgent, insistent, and completely removed from any outside conception other than the oblique and classicist "rules" of the genre; Patria exist by sheer exploitation of those rules and an adherence to preconceived notions of what "underground black metal" should sound like. It's done correctly, but it isn't anything else. Listening to "Liturgia Haeresis," i don't feel any sort of fire or true anger; i only hear the co-opting of form and structure to accomplish a very specific artistic end (to be fair, when done masterfully, that sort of dalliance can result in something great-just not often, and only in the hands of extremely capable practitioners.)
Patria are a band given over to displays of technicality that betray their true end. There are so many razor-sharp melodic guitar lines across "Liturgia Haeresis" that the impact is lost. A better band like Impetuous Ritual understands the severity of juxtaposition between melody and off-the-rails intensity and architecture; the songs then become capable of inducing a blurring sense of awe and a feeling of being buried under something incredibly powerful and towering, even in a stripped down formation. With Patria, that sense of compositional maturity is lost beneath a veneer of youthful exuberance. This is a band of dabblers as opposed to a set of individuals who live and breathe black metal (again, this is a very thin line, and an admittedly aesthetically elitist one.) There are great tracks here: "Death's Empire Conqueror," "Underworld Temple," and "Sons of Destiny" all achieve a rousing blend of black and thrash metals with just the right hint of rock and roll swagger. But other tracks, like the weighty and boring "Nevoeiro" and the stagnant attempt at atmosphere "Legio Mortis Nostrae" (a feeble attempt at achieving the black metal archetypes created by Varg Vikernes' lone guitar pieces on early Burzum recordings) only highlight Patria's failure to communicate the actual passion of black metal and insinuate themselves into the genre framework. "Liturgia Haeresis" then becomes a study; while the approach is intellectually correct and wouldn't sound out of place to those whose only familiarity with black metal was mainstream waders like Cradle of Filth or Dimmu Borgir, to the devotee there is something key missing from Patria's sound.
Normally Drakkar are a label beyond reproach. They have a finger on the pulse of the underground that few could hope to replicate, and their contributions to black metal as a genre cannot be understated. With releases like this, they undermine that contribution and end up trading on their status rather than validating it. This is a rare misstep for Drakkar, and while not a wholly terrible one, it just lacks the fire that normally issues from a label in a constant state of conflagration. Recommended for those curious about the intellectual properties inherent in black metal. For all others, buy anything from Impetuous Ritual instead.
Posted by Cory at 1:41 PM