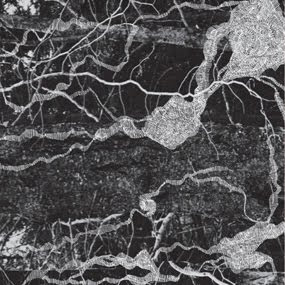 An insane fetish item immediately upon release, this collaborative effort between Liz Harris (better known for her work under the Grouper moniker) and Ilyas Ahmed plays to the strengths of both, and while it easily surpasses anything Ahmed has done as a solo artist, it falls a little short for me as a piece of the Grouper discography. Harris' greatest asset has always been her severe reclusiveness and the aura of shattered, spectral loneliness that haunts her work; here that isolation is introduced to collaboration and while still achingly beautiful, something important gets lost in the transformation, something personal and harrowing and devastating. The beauty becomes a commodity; the introspection and aesthetic of confession becomes not a matter of privacy but of appeal.
Do not let it be said i think this record is at all "bad." It is gorgeous and frustrating, inviting deep reflection and evoking the idea of fizzled out stars, lapping ocean waves across empty beaches, and the cold austerity of an ever-devouring night. The music here seems appropriately distant, beamed in from somewhere amidst watery galazies smeared across the wastes of space, bounced echoes falling back to earth for the few tuned receivers open to the glitches between static dead air. Harris really can't fuck this stuff up; it's too ingrained in her approach and far too important a piece of her artistic self. This is the very notion of creativity as escape: these creations give Harris the strength to accept her existence, the filter through which she can view the world. While that may be a bit psychiatric in its evaluation, the level of personal connection Harris puts in to her recordings more than justifies it. There are few artists working in this vein that put so much of themselves into what they do; Liz Harris pours out of every recording she makes, and the strength of her vision separates Grouper from virtually every other project working in the field. Ambience isn't so much an evocation of mood as it is a state of being; the haunt of sorrow infects the work of strongest players in the field, be it Troum, Aidan Baker, or Lovesliescrushing. The ethereal becomes the real. What is true is what is thought, what is felt. The heart goes beyond the corporeal. The mystery is the reality.
To his credit, Ahmed mostly lets Harris work her magic. The usual overbearing nature of his fragile, spacious guitar work is here put to work in establishing a rich and hazy atmosphere, his clear, delayed lines stretching out Harris's songs and lending weight to key passages as well as accentuating particularly crushing chord changes. His playing lends a certain frame to "Visitor"; without it, the record could easily dissolve into post-delay creationism and hollowed out chamber-draping. On the one song where he takes the vocal lead, "Flickering," he seems to mirror Harris' style, simply a male version of her laconic, dragging drawl. He becomes a part of her puzzle, carving out new pieces that may or may not fit into the picture as a whole. Ahmed's strength is his willingness to recede, to accentuate, and ultimately to embellish. His solo work is far more sparse and delicate; here he lets himself be washed under the tidal wave of Grouper's aesthetic.
And as lovely as all of it is, there's a feeling of blankness. It isn't as expansive as other Grouper records, nor is it as frightening in its sacrifice of self. "Visitor" is hidden, pillowed under a mountain of Harris' previous work, slumbering alongside her more wrenching structures. Only "The Edges" approaches the vistas of beauty ripped open by her discography; it's the only song here that could stand alongside Harris' output and feel like it truly belongs. I understand that verdict may seem harsh, but i feel that Harris is not simply making albums; she's painting an entire worldview, giving like-minded, hurting individuals a prism through which they can view the world and better work within it. This music is strength to a lot of people, myself included, and anything new from Grouper is osmosed and transformed into part of our personal beings. Much like the music of Trist, the music of Grouper helps me; i don't know if i can word it any better. There is something to what Liz Harris does that has a tremendous emotional resonance, and its either there or it isn't.
If you can find this (i couldn't) then by all means buy it-you will not be sorry; you might even find yourself transformed after the process of listening and absorbing it. There are better places to start with Grouper, perhaps not so with Ahmed (his solo records are so removed and dry there's little to connect to); either way the pairing of the two is a twenty minute bath of warmth that won't fail to make an impression. Just not as deep of one as i'd like.
Posted by Cory at 4:50 PM