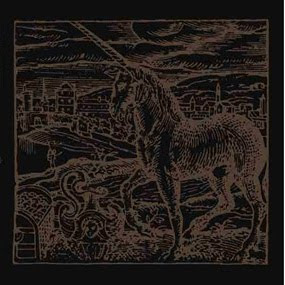 Echtra's most compositionally complex effort, and one that further announces the project's growing distance from the confines of black metal. For me Echtra's strongest aesthetic choice was their embrace of repetition as a means to an end, a blunt force demand on the listener to peek at transcendence and illumination from underneath the cloth of belligerence; on "Paragate" that reliance on repetition is dismissed in order to explore deeper juxtapositions of acoustic and electric, the natural and the modern, with the hope of attaining that same stylization by way of blackened atmospherics and brittle textures. For the most part the record succeeds, showcasing a new level of intensity to Echtra's approach as well a hitherto ignored dreaminess that recalls the blurry work of Troum or Vomir.
"Paragate" is split in to two parts of equal length. "Paragate I" opens up with sharply plucked single notes on an acoustic guitar, a vaguely melodic pattern that both cycles and obfuscates. While acoustic guitars have certainly been a part of Echtra's arsenal, here their presence seems to associate the project more with sister band Fearthainne as opposed to parent project Fauna; there is a sparseness and openness here that veers far from Fauna's crushing assaults, despite similar ideologies. Nature and its fetishization remain the key concern throughout the record, instilling a sense of deep wanderlust and impending dislocality across its measured length. As "Paragate I" progresses you feel like you're wandering deeper into an ever-enshrouded swath of forest, the canopy closing over your head, reducing the touches of the outside to nothing other than memory. The tone is oppressive and little else; there's a fetid warmth and stank to the track that betrays images of moss-covered ancient stones and forgotten hollows grown over with vegetation. The ultimate effect is a shrinking sensation, a reduction in both physical and psychic size that hammers home Echtra's point perfectly. Mankind simply cannot compete with the majesty of the natural world; we are hopelessly outgrown and can be overcome within moments. There are still places in the world that will swallow you; there are still moments in the psychic strain that will rip apart the astral makeup of a human being. Echtra create a swirl of sound in "Paragate I" to paint that reduction; the ten minutes of gale force guitar vomit that closes the track create an appropriately grey sense of psychedelia that points to pure eradication and pointillism.
"Paragate II" offers some respite from the onslaught, opening with a delicate blend of acoustic and electric guitar that is at once beautiful and elegiac. Each sound serves the other; the dance is eternal and destined, so that nary a misstep will be heard. The evocation is intricate and balanced, the spell one of deep enchantment and intoxication. The vestige of black metal hangs thick across "Paragate II"; when the guitars finally come roaring in amid clattering drums and cloudy swooning melodicism the feeling is one of triumphant return. The passage's brevity only heightens its efficacy; a full 23 minutes of Echtra's full-on torrent would only minimize its power. The goal here isn't total hypnotism as on the masterful "Burn It All Away" or the progressive-leaning "A War for Wonder"; instead it's a seduction, a temptation into the forest of illusions and hexes that Echtra inhabits. The meserizations will come of their own accord-the only rabbit hole here is one of bleak and utter shadow, a trip into the endless nightmares of dissonant earthscreams and rupturing fault lines. The break is the totality, the sonics the gauze. Everything here is appropriately hazy and hidden, demanding focus and deep-listening technique to weed out the meaning.
With "Paragate" Echtra have set a new standard for themselves and the Cascadian community they hail from. It simply isn't enough to nod out and ride the hypnotic wave; there has to be something deeper in the mists. Echtra realizes this and has performed a constant transmogrification of their sound, resulting in records of ever-growing complexity and thematic richness. Whether more infantile projects can follow suit is an unknown; the bar has been set almost impossibly high. An ethereal moment for USBM, and one which will hopefully inspire greater creative leaps within the genre as a whole. Recommended.
Posted by Cory at 6:12 PM