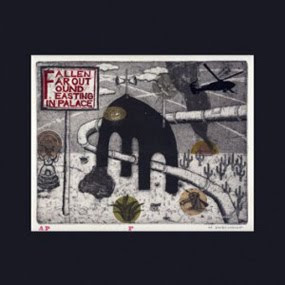 Latest transmission from the always outstanding Bardo Pond, this time paired with California's improv-sorcerers Carlton Melton, resulting in a slab of heavy wax that pretty demolishes any semblance of the physical in search of something far more abrasive, heady, astral, and inward-focused. The two side long jams presented here stretch into the eternal ether, shrugging off corporeal form in favor of utter translucence and osmosing transfigurations. Space rock as rock, bludgeoning and monolithic in its presence. These two tracks have a gravitational weight, given to the pull as much as the soar.
Bardo Pond's contribution "Fallen" is an abnormally aggressive, doom-influenced crawl of a track that shows the band in pure rock out stumle form, searching for the nearest set of stairs to throw themselves down. The Gibbons brothers bear axes meant for scars, and the tendril leads they whip out are far more menacing than anything they've committed to tape since the last Alesehir album. The spectre of Sabbath cloaks this particular session, lending the Pond a severe approach to their usual transportative transcendentalism; while there's nary a power chord to be found across the stretch of "Fallen" there's no shortage of power, and the unbridled electricity Michael and John unleash is kept in check only by the constant threat of drum overload. Isobel is in fine for here as well, her flute playing elevating the track to the level of the mystical, spearing your brain into complete meltdown mode with the lulling caress of her psychedelic flourish. When her vocals finally present themselves they soar, ripping apart the sky and breaking the clouds off into pieces of fearful fluff. Bardo Pond at their best are a heaven-burning machine of brain-swirling psychedelic force and here they're aiming for total voiding washout, a tidal wave of serenity amped up to a shadowy wall of guitar bleaking. As usual these limited engagements make me salivate at the thought of a new full-length-i'd pretty much buy anything Bardo Pond chooses to release at this point.
Carlton Melton's contribution "Slow Growth" moves in the exact opposite direction, unveiling a heavy wisp of glacially-paced atmospherica that unfurls venomously towards a mushroom cloud of in-the-red oblivion. The heavily processed guitar whispers that open the track come off like the bastard child of Magnog and the Bowery Electric, late night confessionals to electricity that threaten to jump off the rails and fry your insides at any moment. It's beautifully comforting and hypnotically lush, receding into the heavy frontal lobe damage that follows. The meat of the track is a panorama of hugely distorted textures and percussive abrasions, with nothing even resembling a riff able to emerge from the din. The purity of sound here is something bright and spectacular to behold, even brighter to be bathed in. Carlton Melton approach reductionism in a completely obtuse and obfuscated manner, relying on the sheer weight of confusion and obliteration tactics to propel their mess into the realm of the astral. For the most part the track succeeds brilliantly, burning itself out in a spattering of guitar squelches and mutated Iommi-isms that remind you there's actually a band underneath all the sonic goop.
Thick like honey and black as molasses, this split is a high mark for both contributors. Bardo Pond just get better and better with each record, to a point where it's criminal that they don't have any real sort of major label support. Carlton Melton seem to even eschew the idea, so it's unlikely that we'll see anything more easily available from either unit for a long while. The artwork on this one is stunning and appropriately dark; the contrast between it and the clear vinyl inside is a nice touch from a label who understands the art of crafting a meaningful split record. Anyone seeking the astral, this is a necessary warping agent. Recommended.
Posted by Cory at 12:14 PM