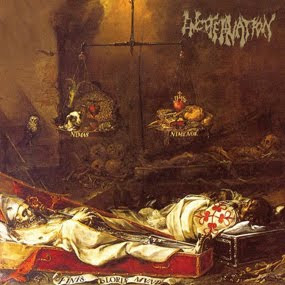 Mournful, cavernous, totally crushing death metal from Encoffination, hearkening back to forebears like Incantation and Immolation while going further out than either band ever did in terms of glacial pace and sickening claustrophobics. The sound here is enormous, completely engulfing in terms of reverberation and echo, the dismal gorges of guitar eruption coursing across the ears like so much dead wood and wasted ash. Everything here is downtuned to the point of near inaudibility, the only constant a droning, pained squelch of wavering guitar strings scraping across the idea of harmony. Encoffination crawl along the bottom of death metal's aesthetic template like detritus, preying on the rotted carrion of vestige left behind from a dead musical art.
The death metal revival aspires to this sort of sound. This is what it's supposed to be. Drawing from the best of the last two decades, Encoffination emerge with something bludgeoningly heavy and soaked in funereal atmosphere, the heavy reliance on bell clangs on "O' Hell..." notwithstanding (they're effective but at times a little overbearing.) This is a beating of bruises made horribly real by the hulking physicality of the music; this shit has an honest, massive weight that will reduce you to a quivering mass of cowering flesh begging for ignorance. This is not for trendy ears, nor is meant as mere flirtation. Those acquiring this are actively seeking it out; the diehards from the early '90's for whom death metal begins and ends with the likes of Cancer and "Left Hand Path" era Entombed. Technicality, often a prerequisite for this style, becomes an utter irrelevancy in the face of such stylized brutality and measured aggression. This breed of death oozes rather than gallops; the pace truly is glacial, with the frigid enormity of a howling, oppressive mountain. Encoffination will sink you.
The anti-Christian elements that characterized so much of the early movement are here in abundance; along with the gloriously and appropriately fetid cover artwork, song titles like "Rites of Ceremonial Embalm'ment," "Ritual Until Blood," and "Annunciation of the Viscera" leave little to the imagination other than a warped palette of putrid color and the rotting stench of consecration through the abuse of flesh. The focus on dark arts and some sort of communion through mutilation and ritual rings loudly throughout "O' Hell...", allowing the listener access to an idea that exists only in the more hidden recessed of modern culture. The cthonic aspect of Encoffination's delivery is chilling; there aren't many bands that can harness this ideology and not collapse under the weight of falsification. Only contemporaries like Teitanblood and Vasaeleth are walking the same path, and even they aren't bringing this much pulsing, seething disgust to the genre. This is not reinvention; this is total worship.
It saddens me that death metal had such a short run; as aaesome as this record is it's arriving about fifteen years too late. Had death metal not succumbed to its own stagnancy and actually allowed itself to incorporate anything from outside, it might have advanced to this point and remained the virulent underground force it originally was. Instead fashions changed and extremity left death metal gasping; the death metal of today's musical landscape bears little resemblance to what came before, aside from some grunted vocals and double bass theatrics. For the most part the sense of danger and weirdness is gone. That's why Encoffination are so fucking amazing. They tap into that dead strain and take it to its logical extension. Incantation was headed there and they just hit a wall; Encoffination have torn that wall asunder and gone into the great death metal beyond. It wasn't meant to get faster, just heavier. Funeral doom relies too much on space; death metal relies on filling that space in a claustrophobic way. With "O' Hell, Shine In Thy Whited Sepulchres," Encoffination have buried anything that ever existed in that space. Total mastery of the form and reinvention of the template. Superlative.
Posted by Cory at 6:17 PM