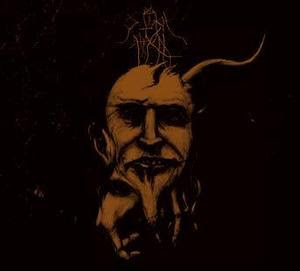 Obliterating white noise tinged with the spectrous hand of blackened iconoclasm via extreme revisionists Sutekh Hexen. Severe interpolations of black metal's aesthetics yield a deathly tornado of frightening sonic enormity, a death knell for falsifications and a lament for the uninitiated. This is ritual music in the same way as Encoffination (recently reviewed); the reimagination of established doctrine creates something toxic, overbearing, and wrought with pestilence. The idea of atmosphere is not wholly abandoned here; instead abandonment becomes the atmosphere, illuminating a dark corner of loneliness and isolationist horror that borders on outright menance. Sutekh Hexen create music born of candlelight knife gleam and the ritual carving away of flesh. The means lie in the end; ultimate cosmic understanding through baptism by pain and flame.
If the goal here is to wash away any idea of the self then these six tracks achieve it by way of unrelenting tidal waves of winterblown blackened howls from the void, the destruction of the physical erupting into swarms of buzzing torrential storm. Structure and construct are folded in on themselves to birth something at once more towering and complex, a blueprint for loss and disappearance that sounds the way with reductionist fanfare and dismantled black metal classicism. Guitars and vocals are here in spades; they're simply grafted onto new forms, given second lives by hammering obfuscation and hyper-processing. Drums become a mere idea, the remnanat of a vestige of a thought, the kindling of memory sparked to blinding evocation. Tracks like "Haunted" and "Haunting" trade on black metal's obliterating assertiveness; the extremity lies in the further deterioration of these understood templates to a point of muted but raging primitivism. Sutekh Hexen are able to strip black metal's essence to its most simple form and further render that anger to something simultaneously choking and cutting. Flesh is pared away, consciousness sheared; reality becomes the dream and the nightmare becomes the actuality. Eternal darkness, eternal evil, eternal night.
Sutekh Hexen's transmissions thus far have been minimal. Nothing like a "full-length" exists and what has emerged have been short blasts of crushing engulfism. While the aura of mystery and the illusion is certainly important to this unit's approach i'd like to see the sound stretched to capacity; if it could maintain its severity across a span of an hour the transcendent potentials would be near boundless. This is another unit that truly understands the idea of cutting flesh to widen sight; the tearing open of the third eye by way of the shear and exposure to the end of physical limit is the very heart of black metal's most sacred inheritance. While the 18 minute live performance that closes out this collection chooses to wallow in the stagnant pools of darkened drone theatrics, the incredible intensity of the summoning cannot be denied. Even when it's quiet, this shit is deafening. This is the sound of the black spaces in between the black spaces; this is the sound of nothing wrought to being. The void howls; the abyss looms. We all teeter at the brink; Sutekh Hexen have found the strength to fall.
Posted by Cory at 2:50 PM