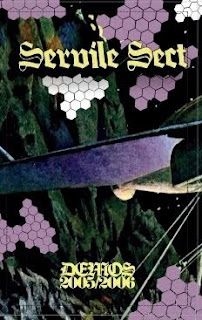 Far-reaching black metal narcolepsy illuminating the more cough-syrup aspect of expansive psychedelia, courtesy Servile Sect. Coming off this year's astonishing album "Trvth" for Handmade Birds, this demo collection is an effective stopgap historical document showcasing the mind-numbing freakism this band is capable of achieving; this is nothing less than a reiteration of the cosmic in the black metal lexicon transmuted via low frequency and a total reconfiguration of classicist aesthetic, arriving at two lengthy pieces that emphasize the inquesting side of the genre as opposed to its more aggressive public persona.
Servile Sect are a black metal band in the loosest sense of the classification; since their debut they've played up the druggier, more wasted elements inherent in BM (extremity leads to clarity) and crafted a sonic hypercube of frosted rainbow collapse and sky-shattering histrionics. "Demos 2005/2006" finds the duo experimenting with (or wallowing in) gross electronic discombobulation, an electronic severance with the genre actuality that begets a molasses-like drift of expanse, a burbling, sputtering descent into the lower depths of redefinition that owes as much to the Hanatarash as it does to "Deathcrush" era Mayhem. The style becomes the substance; the pool becomes the ocean. Such is the propulsive force of Servile Sect; the two pieces here achieve a rare infinity of purpose, an endless morphing and process of self-recycling that becomes a heady sonic goop capable of true psychedelic fracturing.
This is zone-out level shit. There is little to no off-the-rails severity to be found; instead there's a dark contemplation rendered via a panoramic miasma of abused effects, synthesizers, and a willingness to break with the commonplace and the expected. To me this is the root of black metal; for the less adventurous it might seem little less than a total and complete affront. This is not a rejection of black metal ideology but rather an innovation, a remolding to fit the needs of a technologically rampant culture. The specter of advancement haunts this collection, as though the sounds found within were the remnants of an apocalyptic time capsule washed up on the shores of earth ten millenia from now. The inability to harness the ideas we've put forth leads to the question of their ultimate end, and by extension ours; we're slowly destroying ourselves and eroding the very concept of humanity with each shiny new piece of inefficiency. Servile Sect curls in amongst those warnings and melts them down into audio rot, a transmogrification of the NOW into some future THEN, as evocative a warning as a Tarkovsky film. The confines exist within the actions; to go beyond and traverse the myriad layers of being is the true discovery.
"Demos 2005/2006" is remarkable astral exploration; the flippant approach to consciousness displayed across these two tracks approaches a dark hypnotism seen in the works of Lustmord or Deathprod. From a purely classical perspective these works seem to recall the early approach of Plasma Pool; the electronic aspects also obviously echo the synthesized soundscapes of so many first wave black metal"intro" pieces. But this cassette goes well beyond the constraint of a mere introduction; this is hypercolor indoctrination, the erasure of the mind to start anew. Invite the cleanse.
Posted by Cory at 8:00 PM