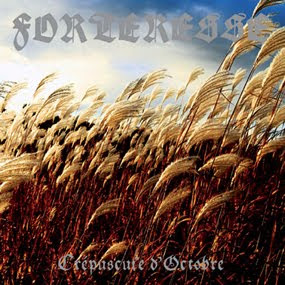 Another hypnotic onslaught from Quebec's mighty Forteresse, showcasing absolutely zero growth while still being an example of everything i love about black metal. This is pure and total recidivism, reducing black metal to its most simple and basic tenets: tremelo picking, blast beat drumming, and cavernous atmosphere. The pace here is unforgiving; even the few headbanging moments in which Forteresse relent to half-time are pure intensity. I admire the vision Forteresse have for black metal. In seeking to establish a distinct Quebecois voice, they've crafted something utterly transfixing, blinding, and blurring. There's really no other way to describe what this band does. They just stop time and spin it into a whir of naturalistic aggression.
As always, the melodies and structures remain obstinately classicist; in Forteresse's definition of black metal there is little room for avant-gardism or deviation from the proven. Massive swhorls of fuzzed-out chords lead reverb-laden double bass driven drumming to clouds of furious indictment, the painterly sonic deathgasms of Forteresse's history lessons. The samples of ancient Quebec folk songs remain, leading into and out of insane black metal maelstroms. While one could say their efficacy at this point (four albums in and Forteresse have not changed) is questionable, the atmosphere they lend to the proceedings is simply unparalleled. The blend of traditional with neotraditional (from a black metal context) has become the template on which this unit bases their entire platform, and it's honed to a gleaming knifelike point of precision. There is not a wasted minute or a wasted note here, and though most songs on "Crepuscule d'Octobre" stretch into expansive lengths, i find myself wanting them to go on forever. The sheer and unadorned minimalism that Forteresse embrace is intoxicating and shatteringly psychedelic; this is the obliteration of the consciousness that black metal strives for. Bands like Xasthur and Paysage D'Hiver have to cloak their pieces in swarths of ambience and hypnotic postproduction to arrive at what Fortertesse achieves naturally: pure fucking transcendence. The majesty and power inherent in Forteresse's virulent form of black metal gets at the heart of Burzum's elongation and Mayhem's technical abstraction.
I've heard Forteresse called out for the simplicity of their approach, that what they're striving for is somehow redundant or unimaginative. The only response i have to those remarks is a solid "fuck off." "Crepuscule d'Octobre," and this bands output as a whole, are what black metal is all about, pure and simple. Individualism, rebellion, anger, aggression, and a transport to realms beyond the real. The cognizant hides the truth. Forteresse exist in a world of astral sorrow, a world where a swaying field of wheat says as much about philosophy as a Nietzsche text. Image and thought are closely intertwined; so then are music and motivation. Emotion is the springboard for every action; events of history are defined by the emotions that brought them forth. Existence is not a solely intellectual exercise; it is one defined by your individual experience and your interpretation of the events taking place before you. What goes on inside of you creates what goes on outside of you. To ignore these truths is an act of betrayal, a renunciation of humanity.
Forteresse capture these evocative moments. They are defining, all-encompassing, real and tangible. That they endorse a return to primitivism is secondary to the fact that they endorse a remembrance of the defining characteristics that make us human and unite us. While "Crepuscule d'Octobre" is far from an affirmation, it is a call to action. The demand is consideration: of our lives, of our station, of the histories we've created that do not necessarily correspond to the histories that exist. Forteresse are about nullification through memory, singularity through eclipse. The light destroys. The darkness gathers. The remains are mystic and uncorrupted. These are the true cries of lost and forgotten sad spirits; these are the mournful wails of societies long since crumbled and modes of conduct long abandoned. There was a simplicity to life that is long since lost to us; there was a morality that embraced collectivism and bestowed upon us a rich and varied cultural keepsake. We've lost sight of it now, whether it's in Quebec or the United States. Now we praise dullardism and brainwash tactics disguised as popular entertainment.
It's difficult for me to really communicate how important i feel this record is. I can only implore you to listen to it, and be swept under the power of its aesthetic and message. This is masterful black metal invocation. Highest possible recommendation.
Posted by Cory at 4:46 PM