WHITE RING "BLACK EARTH THAT MADE ME" (Rocket Girl) 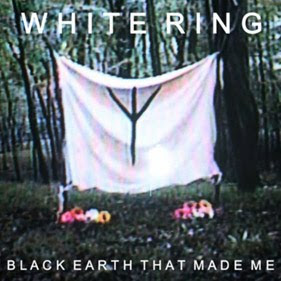 Coming off like an amalgamation of David Lynch's "Blue Velvet" and MBV's "Loveless" stripped to just the atmospherics, White Ring's debut LP, reissued here by Rocket Girl, is one of the darkest, most haunting slabs of neo-shoegaze to grace the turntable in some time. While the appropriate tag for what White Ring trade in is witch-house, i feel that's a little narrow in scope considering the blush of sound these two churn out; the hallmarks of witch-house are all present and accounted for but there's an epic, far-reaching blackness that enshrouds this record so much that to simply identify it as some sort of "chopped and screwed" molasses-paced club music is to do it a woeful disservice. Not to say i dislike witch-house, because i don't-White Ring just goes way further than that and deserve recognition for it.
There's a tendency in mainstream critical media to make sure that witch-house stays small and stays rigidly defined (see any of Pitchfork's reviews of witch material), and that strikes me as odd, because what the genre is truly offering is an amazing template to jump from and bring different shit into. The basics are so crushing that anything else incorporated even moderately well is just going to be monolithic. White Ring get that, and their blending of witch-house with massive shoegaze-sized texture and death metal aesthetics yields a mixture so thick and potent, the emotions are practically carved out of the listener with a cold, gleaming knife. White Ring convert the lush wash of sound from MBV into a distillation of pure hollowness, a blizzard of isolationism and fear that reduces shoegaze's perceived mass and warmth into something claustrophobic, caustic, and all-encompassing. "IXC999" proves unrelenting in its advance, a fusion of bass-driven goop and numbing repetition that bed Kendra Malia's angelic, hyper-glitched and distorted vocals with swooning eruptions of keyboard bliss that drown the room in fetid syrup. "Roses" and "Suffocation" marry standard structure to the gloom of Have A Nice Life and the sweeping expanse of Sigur Ros, arriving at a new plateau of harrowing. "Suffocation" in particular amps up the eroticism (watch the video sometime) and confronts the listener with sexual aspect of bass throb, daring us to not be intrigued and repulsed by what's presented. There's a sickly sweetness to what White Ring do, a feeling of wrongness and taboo that permeates the work. This level of tone is difficult for any band to create let alone maintain across 40 minutes, and White Ring do both beautifully, turning in a record both mesmerizingly psychedelic and achingly confrontational.
While witch-house is by nature a genre concerned with the physical presence of its audio, White Ring go even more out there and embrace a sort of death metal aestheticism in their approach. "We Rot" not only evocatively brings to mind Obituary's seminal death classic "Slowly We Rot" with its title alone, but also with the processing of Kendra's vocals again, this time to the point where octaves and suboctaves rumble underneath her near hysterical shrieks, creating a trichromatic assault that echoes Deicide and extreme BM vocal acts like Silencer and Urfaust. The thunderous bass panning throughout the track adds to this density, making you feel like you're in the center of thunderstorm, your skin being flayed and pelted by burning rains and assorted flying debris. This is apocalyptic shit, made all the more terrifying because it's so seductive.
There is a rank beauty to be found here-the triumphant keyboards that frame the majority of "Black Earth That Made Me"'s tracks ensure it-but there's also a pitch black center of nothingness. So much of the music i love attempts to get to that sacred place of void, where the only thing is the sound, where even the concept of "music" disappears and the only thing you're left to consider is the true reality of creativity; White Ring are getting there too, albeit with more of an emphasis on melody as a guide, as a temptress, as a comfort to lure you into the debauched hole of rampant sexuality and nightmarish hallucigenia that makes up their world. "Black Earth That Made Me" is simply gigantic, a benchmark for its niche genre and a mission statement for a strange, unsettling voice in new wave ambience. Give in and wash under; let the wisps and the breaths take you to the recesses. Highly recommended.
Posted by Cory at 1:05 PM