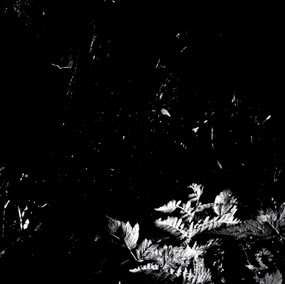 Strains of drone interpolated by two of the more classically minded outre practitioners of the art, the noir-tinged Oakeater and the poignant Mamiffer. I can't help but think of this as being an extension of the Oakeater/Everlovely Lightningheart split that came out a few years back; if Mamiffer is the logical progression of Faith Coloccia's approach to chamber music, then this split delivers more intensely on the sound hinted at by Everlovely Lightningheart's complex avant-suites, with Oakeater abandoning their usual lording drone in favor of something more compositionally minded as well.
Of the two, Oakeater's side ends up being surprisingly more varied. Their piece is more a number of miniature movements adding up to one larger whole, with each division highlighting some aspect of repetitive drone via piano, field recordings, or the massive keyboard throb that ends it all. "Iron Age II" was so far removed from the Oakeater i know i wondered if i had the wrong side playing; their reinvention for this split almost seems to be born of a desire to force Mamiffer out of their usual comfort zone by beating them at their own game. There isn;t anything particularly menacing or oppressive about Oakeater's work here; it simply is, it has a stated downward pull, and it's dark like tar. It's a perfectly serviceable addition to their discography thus far if not mindblowing or transformative; it's just another side of the prism. On some level i miss the heaviosity of what i know this unit is capable of. On the other hand i can understand why they might have gone this route considering the pairing, and in that light they outperform Mamiffer from a purely compositional perspective.
The Mamiffer piece seems out of character for them as well, again almost confusingly so. The first ten minutes are a blinding onslaught of glacial drone guitars lifted up by an angelic underpinning, similar to "Earth 2" as filtered through swords of light and fractured glass. Aaron Turner's hand is unmistakably felt on this outing, almost to the point where i'm beginning to wonder where Coloccia ends and Turner begins (as the two are married, perhaps the question of their differing artistic aesthetics becomes moot.) The guitars are encompassing and thick, ever-present and threatening; this is Mamiffer as a sheer tectonic force, melting into a slough of oozing globulation and drowning retribution. When the guitars finally wash themselves and allow Coloccia's piano work to come to the fore, the piece changes dramatically, becoming a stately chamber demonstration rather than a free-form exploration of drone expanse. The two extremes work well together; when Turner layers his effected slabs of distortion over Coloccia's keywork the piece achieves a muted sort of bliss.
It's an interesting split from two highly individualized musical units; the differing approaches add up to a smothering whole that yields maximum obliteration for altered consciousnesses. This is sonic syrup, ear goop for the intellectually minded, modern composition by way of a cut and paste approach to the banalities of being. Everything inspires, and everything in turn can be a building block. The mystery lies in the assemblage.
Posted by Cory at 4:22 PM