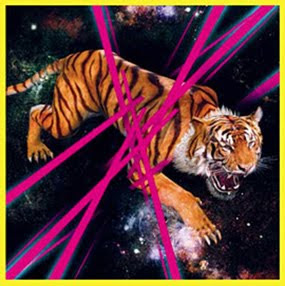 I'm not sure what to make of this. Pharaoh Overlord have long been one of my favorite bands, given to the total worship of the power of the riff, simplicity filtered through aggression resulting in some of the most punishing head-nodding zone-out jams this side of 5ive. The formula has rarely changed, with each album wrapping itself up in numbing repetition and adolescent to the point of brutal guitar figures until total immersive hypnosis is achieved, the terminus point of so much rock bloat packed into such tightly constructed paths. On "Out of Darkness" Pharaoh Overlord performs a complete reinvention of sound, succumbing to the '80's rock worship hinted at in so many records by parent project Circle. Here that hint is turned into full blown adulation, such a beautifully accurate approximation of sound that's it difficult for me to decide if this record is heartfelt tribute or all-out parody (my extensive Circle collection leads me to believe the latter, but this record makes it a very tough call.)
As with Circle's "metal" record "Hollywood," "Out of Darkness" is brimming over with hallmarks of the the '80's metal sound: pure Marshall crunch, soaring vocals, workman-like bass and harmonized guitar lines echoing the Maiden heyday. The album instantly recalls Judas Priest and Accept in its brute force and speed metal aspiration; even insipid swill like Sammy Hagar gets referenced on empty-headed rockers "We Came To Rock" and "No Speed Limit." As historical revisionists, Pharaoh Overlord are insanely well versed in the posture and aura of the era they're looking to evoke; when attempting to view the music as a worthy and original piece of the overall discography it falls far short of the line. Despite the metallized, exuberant strength of tracks like "Out of Darkness" and the majestic, insane "I Am The Light" the record as a whole stumbles into 1985 filler type material, with bland, twisting songs that reference Sebastian Bach and the darker side of purely chromatic compositional atrocity ("Transylvanian Afternoon" is such a poorly conceived song it's a wonder the pointless riffs don't fly out of the speaker and slap you in the face for even listening to them.) The highlights can't recover the album as a whole-it's just too ridiculous. The lyrics don't help matters any either, boasting some of the most inane and cliched rock tropes they make "Hot For Teacher" read like T.S. Eliot. And while the vocal imitations are admirable, the fact that several songs devolve into Layne Staley type ululations pretty much kills it for me. With such a massive pool to draw influence from, why choose the voice that indirectly birthed Godsmack to the world?
My familiarity with the Circle universe (as well as that of project mastermind Jussi Lehtisalo and Ektro Records in general) helps me understand why this record turned out the way it did. There's nothing wrong with incorporating influence-Circle did the same thing on "Hollywood" but managed to inject enough of their own aesthetic into to it arrive at something new-but this sort of "all-in" abrasiveness is a serious backwards step for a group already deep into the lake of recidivism. I love a lot of this record: the guitar work is stellar throughout, and the band sounds tight as shit. But it's just too silly for me to really appreciate it as anything other than a lark outing. If the whole record had veered more in the direction of "Devastator," nine minutes of hyper-repetitive Judas Priest riffing that barrels towards total guitar solo collapse, i would have been able to more firmly place this record in the Pharaoh Overlord lexicon. Instead we're treated to a loving tour of '80's metal icongraphy. It's nostalgic but much like the glut of bands that polluted the 1980's landscape, it wears out its welcome very quickly.
Posted by Cory at 11:50 AM