BUCKETHEAD "SHADOWS BETWEEN THE SKY" (Self-Released) 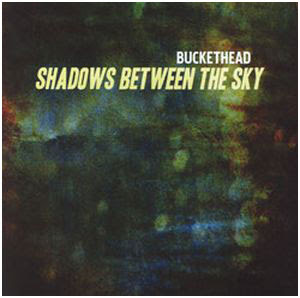 A lot of people tell me their favorite Buckethead album is "Colma," and with good reason. Easily one of his prettiest efforts, and therefore one of his most accessible, "Colma" showcased a side of Buckethead that downplayed the shred and focused more on the composition. At a time in his career when his discography wasn't as clogged as it is now, "Colma" seemed super different. The hazy echoes, the melancholy chord progressions, the restrained yet tasteful soloing-it was something he had hinted at but never fully embraced. Gone were the overt metalisms and in their place was a sensitivity and maturity that was less Shrapnel Records and more Windham Hill. In a sense it was Buckethead's "Hot Rats," the Buckethead album for people who didn't like Buckethead. I rarely reach for "Colma" anymore; i prefer to hear Buckethead tearing the shit out of the fretboard with full-on metal cliche roaring behind him. That's me though, and i represent a specialised niche in the Buckethead audience at large. There's a lot of people wanting another "Colma."
"Shadows Between the Sky" looks to answer that request, as have several profoundly boring albums before it; this is the most simplistic side of Buckethead with none of the invention or emotional resonance. Pure self-cannibalising and soulless regurgitation disguised as something new. Fifteen songs that serve as little more than sketches eat up 45 minutes and leave you with little memory of their passing. This is background music that happens to be played on guitar; there's so little personality to it that it could have been any hack with a knowledge of minor key and a couple delay pedals. I love that Buckethead more or less seems to be writing and recording all the time-there's nothing inherently wrong with being prolific, and i certainly don't mind more music from artists i admire. But i do mind the glaring inconsistency in Buckethead's output, and it pisses me off more than a bit when there's not a single guitar solo on a record by a musician who's made his reputation by playing insane guitar solos. It can work once, but after that the shit just gets insulting.
Even the aura of "Colma" is missing here. "Shadows Between the Sky" has no warmth, no connection, no mystery. "Colma" basked in a sense of loss and nostalgia; there was a feeling throughout of sadness and regret. It was beautiful but it hit you, sometimes hard, and tried to extract something from you that it was touching. That focus is not present here. Instead there's a self-satisfaction on the composer's part, the woeful idea that if it was recorded it has to be heard. While some of the songs here arrive at something close to the loveliness that defined "Colma," they're nothing other than skeletons. The record feels bare and empty, and not in an intentional or aesthetic way. It's because there's nothing truly there. I'm sure there's some people out there in the Buckethead base that dig this type of record; i know he's got a broader palette than majestic forgotten riffs of the '80's and double bass onslaughting. I just don't want to hear it anymore.
Posted by Cory at 4:12 PM